Rasa - Israeli aircraft have bombed a multi-story building in Gaza City amid threats of another full-scale military offensive against the besieged coastal enclave. 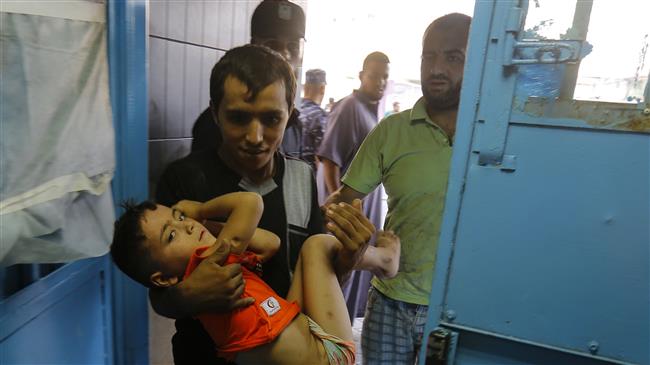 RNA - Local residents and witnesses said the explosion shook buildings in Gaza City on Thursday as dust and grey smoke filled the air. Palestinian health officials said at least four people were hurt in the airstrike.

The Israeli military has carried out over 140 strikes against the Gaza Strip in less than 24 hours. The attacks began on Wednesday night and continued into Thursday morning.

The latest aerial raid came after a long-range rocket allegedly fired from Gaza struck an uninhabited area outside the largest city in southern Israel on Thursday.

Israeli police said they found the remnants in an open area on the outskirts of Beersheba and that no one was hurt. Israeli Army Radio said the rocket was a long-range Grad capable of reaching Israel's heartland.

The Israeli military has claimed that the missile system Iron Dome intercepted 25 rockets out of the 150 rockets, which activated sirens in the occupied territories over 125 times.

According to Press TV, Palestinian resistance movement Hamas claimed responsibility for the fresh rocket attacks, saying it was avenging the deaths of two fighters in an Israeli tank fire in Gaza on Tuesday.

People in the  Gaza Strip earlier held a funeral for the pregnant Palestinian woman and her child killed by Israeli airstrikes. Mourners carried the bodies of Enas Khammash and her 18-month-old daughter Bayan in the central Gaza town of Deir al-Balah.

Palestinian President Mahmoud Abbas has called on the United Nations to stop Israel’s latest aggression against Gaza. Hamas says all resistance factions have halted firing at Israel following a flare-up.

Meanwhile, the UN said it is concerned over the exchange of fire between Palestinians and Israel and called on both sides to step back from the brink.

Tel Aviv has threatened a full-scale military offensive against Gaza. The region has been under Israel’s all-out siege since 2007 and witnessed three wars since 2008.

Tensions have been running high near the Gaza fence since March 30, which marked the start of a series of protests demanding the right of return for Palestinians driven out of their homeland.

The Gaza clashes reached their peak on May 14, marking the 70th anniversary of Nakba Day (the Day of Catastrophe), which this year coincided with the US embassy relocation from Tel Aviv to occupied Jerusalem al-Quds.

Nearly 160 Palestinians have been killed and some 17,500 others wounded in the fresh bout of violence, according to the latest figures released by the Palestinian Health Ministry.

Tags: Israel Gaza
Short Link rasanews.ir/201qDC
Share
0
Please type in your comments in English.
The comments that contain insults or libel to individuals, ethnicities, or contradictions with the laws of the country and religious teachings will not be disclosed