Casualties of US Air War in Syria

Rasa - It is forbidden to kill civilians in a war; therefore all murderers and war criminals are punished unless they kill in large numbers, to the sound of trumpets, and they are American occupying troops in Syria. 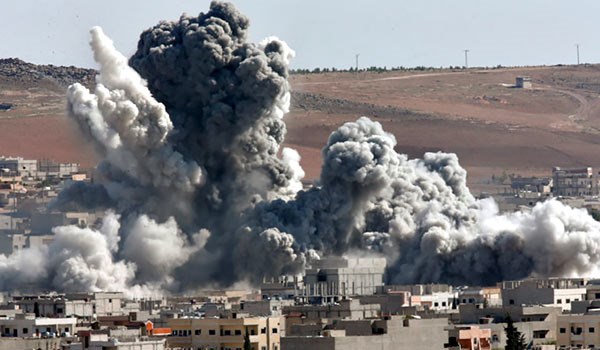 RNA - Tragically, Amnesty International says even the US-led coalition's admission to killing scores of civilians during its operations is just the tip of the iceberg. The rights group has done a research that prompted the US-led military coalition to admit to the killing of civilians in its offensive on Raqqa in North-East Syria. The report stresses that the US must immediately start "thorough, independent" investigations to expose the full scale of civilian deaths and reimburse the victims and survivors.

Tell that to the Trump White House. Their admission of responsibility might not be surprising though, given the level of existing evidence. They sometimes admit it to the public anyhow because they know no one at the United Nations is going to hold them to account. As Amnesty International maintains, “This is only the tip of the iceberg.” Simply by covering similar cases in other parts of Syria, as well as Iraq and Yemen, it’s not that hard to point to a civilian death toll in the high thousands.

Just like in Raqqa, those cases also broke, and in the case of Yemen, are still breaking International Law, where Saudi Arabia, backed by the US Army intelligence and arms, continues to kill and maim innocent civilians, all while withholding the details that are crucial to determining the legality of strikes. If the Saudi-led coalition cannot avoid inflicting high civilian death tolls, that’s because the US refused to account for what happened in Raqqa (which fell in the hands of US-sponsored militants last year) and North-East Syria.

We all know how UN investigators have on numerous occasions urged the United States to probe its deadly Syria air strikes. But they are not a tribunal and have no powers to take their investigations further, which is a shame. Because in many cases the UN investigators found no evidence that ISIL fighters were at the targeted schools and markets in besieged areas.

International Law is clear. Victims must be helped to obtain justice, which should be a central component of any negotiated settlement ending the war. Those responsible for ordering or carrying out gross human rights violations and committing international crimes such as war crimes, crimes against humanity or genocide, should also be held to account in The Hague.

Lest we forget, this is the same America which still has no idea how many civilians it killed and injured in Iraq. Sixteen years after the US launched its so-called “war on terror” millions of people’s lives have been turned upside down. An untold number of innocent civilians have also been killed – by disease, illness, in gruesome tortures performed by foreign insurgents, and by the US and UK-led military campaign that the Pentagon regime vowed would be surgical.

Perhaps that says why the US finds it hard to address the painful issue of civilian casualties in Syria, which Amnesty found that, contrary to the claims of the Pentagon, many US coalition air strikes on alleged ISIL targets resulted in civilian deaths.

According to Fars News Agancy, the Pentagon is free to insist it takes great care in preparing for and carrying out military strikes, but that’s not what the long-suffering people of Syria and international investigators witness on the ground. The unfortunate death of civilians and the US occupation of the post-ISIL country is a fact of war that weighs heavy on Syrians.

They hold the US-led coalition responsible for their never-ending sufferings and pains. Seventy-four nations are in this coalition, including the UK, France, Germany and the Netherlands, as well as the Persian Gulf Arab states. Their mission to regime change Syria on the pretext of fighting ISIL has only seen them target Syrian military positions which are at the forefront of the war on terror as well as countless civilians who have been caught in the strikes since August 2014.

From the start of this illegal campaign, the US and company have killed over 9,000 civilians, according to Airwars, a monitoring group of experienced investigative journalists and researchers. Many of those were women and children. The numbers are in stark contrast to the Pentagon’s own data. When contacted by independent journalists and researchers, the Pentagon simply dismisses the reports and gets on with its next air strikes.

Hence, it is now evident more than ever that the US allegations about its quest for peace and security can only come through killing civilians in this indiscriminate air war.

Tags: US Syria
Short Link rasanews.ir/201qD9
Share
0
Please type in your comments in English.
The comments that contain insults or libel to individuals, ethnicities, or contradictions with the laws of the country and religious teachings will not be disclosed