Rasa - More than a dozen members of the Daesh Takfiri terrorist group have been killed after Iraqi security forces launched a counter-terrorism operation in the country’s troubled western province of Anbar as government troops are trying to flush the last remnants of the extremist outfit out of the crisis-hit Arab country. 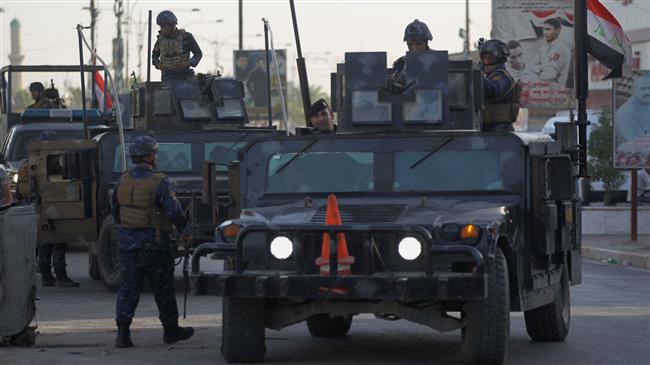 RNA - Colonel Shaker Obeid al-Rishawy told Arabic-language Basnews news agency that the Federal Police Force received a tip-off about the presence of a group of Daesh militants in a desert area south of al-Rutbah town.

He added that three underground tunnels, which the Takfiris were using to stockpile various kinds of munitions and move freely between areas under their control, were also uncovered and destroyed.

Rasool added that the detained Daesh militants were wanted on terror charges under the Iraqi Anti-Terrorism Law.

Elsewhere in the central province of Salahuddin, four army soldiers lost their lives and five others sustained injuries in an overnight attack by Daesh militants.

Saadi added that reinforcement troops arrived on Thursday morning, and began an operation to hunt down the assailants.

On June 30, Iraqi Prime Minister Haider al-Abadi, who is also the commander-in-chief of Iraqi forces, pledged to hunt down the remnants of Daesh militants across Iraq after a series of attacks and abductions by the terrorist group.

“We will chase the remaining cells of terrorism in their hideouts and we will kill them, we will chase them everywhere, in the mountains and the desert,” Abadi said.

According to Press TV, Abadi declared the end of military operations against Daesh in the Arab country on December 9, 2017.

On July 10 that year, the Iraqi prime minister had formally declared victory over Daesh extremists in Mosul, which served as the terrorists’ main urban stronghold in the conflict-ridden Arab country.

The Iraqi forces took control of eastern Mosul in January 2017 after 100 days of fighting, and launched the battle in the west on February 19 last year.

Tags: DAESH Iraq
Short Link rasanews.ir/201qD6
Share
0
Please type in your comments in English.
The comments that contain insults or libel to individuals, ethnicities, or contradictions with the laws of the country and religious teachings will not be disclosed