Rasa - A baby and her pregnant mother were among three Palestinians killed overnight Wednesday as Israeli warplanes carried out more than 140 strikes against the Gaza Strip, threatening another full-scale military offensive against the blockaded coastal enclave amid escalating tensions. 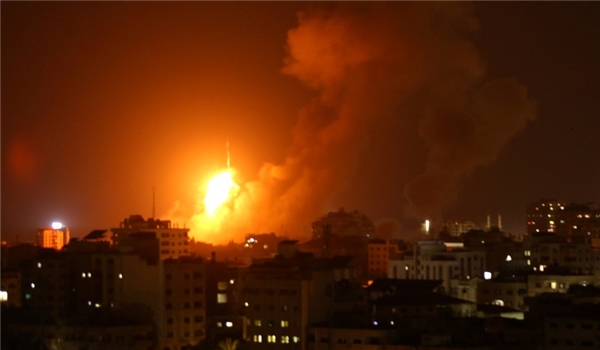 RNA - 23-year-old Enas Khammash and her 18-month daughter Bayan were killed in an airstrike in Jafarawi in Central Gaza, the Palestinian Health Ministry said, while her husband was seriously injured.

The health ministry also added that Enas was in her ninth month of pregnancy.

Earlier in the night, an Israeli attack targeted a Palestinian car, killing a man in his thirties. The man was later identified as Ali al-Ghandour.

More than 10 other Palestinians were also injured in the attacks, while their health condition and identities remain unknown.

The Israeli army stated on Thursday morning that the Tel Aviv regime had pounded more than 140 targets in Gaza belonging to the Palestinian Hamas resistance movement. The Israeli military claimed that the attacks came after around 150 rockets were fired from Gaza into the occupied territories from late Wednesday into Thursday.

Israeli fighter jets and drones carried out a series of air raids targeting the Northern part of the Gaza Strip, the Western part of Gaza city and Rafah city to the South, causing destruction to Palestinian properties. A number of resistance sites were also targeted during the attacks. Israeli tanks also fired shells at Palestinian resistance movement Hamas' posts in Northern Gaza.

The Tel Aviv regime has further claimed that the Israeli missile system Iron Dome had intercepted 25 rockets out of the 150 rockets.

Rocket alert sirens were sounded in several areas close to the border with Gaza, warning Israelis to seek immediate shelter, according to the Israeli army. The IDF remains on high alert and stressed that it is prepared for a variety of scenarios.

Hamas claimed responsibility for the fresh rocket attacks into the occupied lands, saying it was avenging the deaths of two fighters killed in an Israeli tank fire in Gaza on Tuesday.

“In response to Israel aggression, the Palestinian resistance has launched a large number of rockets in recent hours at the enemy. There was a promise [to respond] and now it has been fulfilled,” Hamas added.

UN Secretary-General Antonio Guterres had warned in mid-June that the "most serious escalation" of violence in the Gaza Strip places the besieged enclave on the "brink of war", urging Israel and Hamas to recommit to a 2014 ceasefire.

Tensions have been running high near the Gaza border since late March, which marked the start of a series of protests, dubbed “The Great March of Return”, demanding the right to return for those driven out of their homeland. The Gaza clashes reached their peak in mid-May, the eve of the 70th anniversary of the Nakba Day (the Day of Catastrophe), which coincided this year with the US embassy relocation from Tel Aviv to occupied Jerusalem al-Quds.

Since weekly mass rallies began along the Israel-Gaza border, at least 160 Palestinians have been killed and more than 17,500 others wounded by Israeli army fire. The overwhelming majority of the dead and wounded have been unarmed, according to Gaza health officials.

According to Fars News Agancy, Israel carries out regular attacks on Palestinians in Gaza under the pretext of hitting Hamas targets, while the Gaza Strip has been under an inhumane Israeli siege since 2007.

The Tel Aviv regime has also launched several wars on the Palestinian sliver, the last of which began in early July 2014 and ended in late August the same year. The Israeli military aggression killed nearly 2,200 Palestinians and injured over 11,000 others.

The United Nations Children’s Fund (UNICEF) has announced that children in the Gaza Strip are the main victims of Israeli atrocities, where some 2 million people are living under a crippling blockade.

Tags: Israel Gaza
Short Link rasanews.ir/201qCy
Share
0
Please type in your comments in English.
The comments that contain insults or libel to individuals, ethnicities, or contradictions with the laws of the country and religious teachings will not be disclosed