US Engaging in Psychological War against Iran

Rasa - Lieutenant Commander of the Islamic Revolution Guards Corps (IRGC) Brigadier General Hossein Salami strongly blasted the US for making use of psychological warfare against the Iranian government and nation. 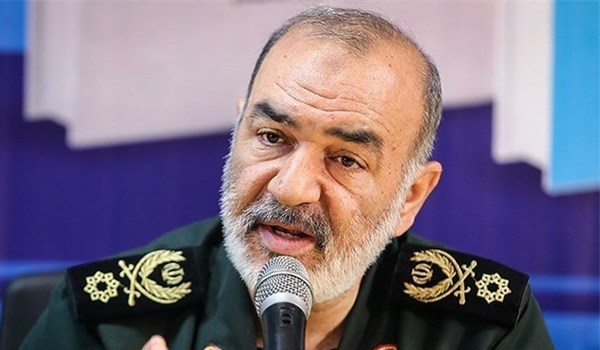 RNA - "The US is trying hard to force the Iranian officials into negotiations," General Salami said.

He pointed to the resistance by Iran against the US plots and hostilities, and said, "Iranian nation stands firmly against all enmities and defends the independence of the Establishment.”

According to Fars News Agancy, General Salami reiterated that Washington is trying to create a safe Middle East for the Tel Aviv regime, and said, "With all the efforts made, today there is nothing for this regime in the region, except for a nightmare."

In relevant remarks in early May, Ayatollah Movahedi Kermani blasted the West for increasing pressures on the Islamic Republic, and said that the Iranian nation will stand up firmly against enemies' plots.

"We declare to the world of arrogance and superpowers in the world that the Iranian people have stood firmly on their position and will defend the country with all means and power."

The senior cleric, meantime, called on the Iranian people to increase their unity in a bid to defeat the enemies.

He reiterated that the Iranians will not bow to foreign pressures, and said, "Islam has a lot of enemies but the country is not concerned about the malicious conspiracies waged by enemies against the Islamic Republic of Iran, rather, the noble nation of the Islamic Iran under its wise leadership managed to foil all plots of enemies."

Tags: Hossein Salami IRGC Iran
Short Link rasanews.ir/201qCp
Share
0
Please type in your comments in English.
The comments that contain insults or libel to individuals, ethnicities, or contradictions with the laws of the country and religious teachings will not be disclosed