Rasa - Syrian government forces have found various types of weapons and munitions, some of them Israeli and European-made, inside a weapons cache belonging to foreign-sponsored Takfiri militants in the country's central province of Homs as they continue to make territorial gains in battles against the extremists. 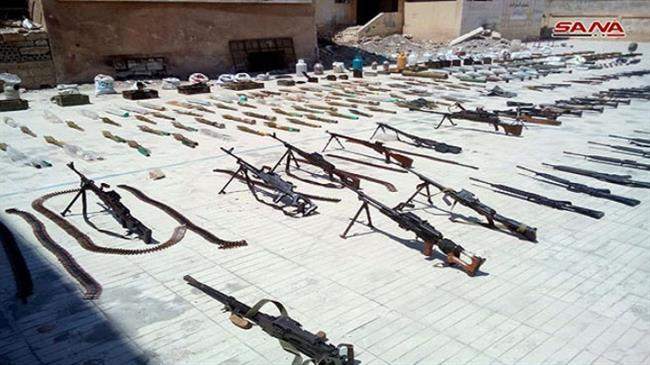 RNA - Syria’s official news agency SANA reported that Syrian army troopers made the discovery during clean-up operations in Houla region, which is located northwest of the provincial capital city of Homs, on Wednesday.

Meanwhile, a so-called monitor group says Syrian government forces are making progress in the battles against Daesh terrorists in the southwestern province of Sweida.

The Britain-based Syrian Observatory for Human Rights said the battles are raging in the eastern and northeastern desert regions of the province as army soldiers are pushing to flush Daesh Takfiris out of their last strongholds in southern Syria.

The Observatory added that four pro-government fighters were killed overnight when a Daesh militant launched an attack. Local residents later managed to catch the extremist involved in the act of terror, and hanged him.

Syrian soldiers hunt down terrorists in Hama, cuts off their supply routes

Elsewhere in Syria’s west-central province of Hama, government forces destroyed terrorist fortifications in the northern countryside of the province and cut off their supply routes towards the southern sector of Idlib province.

Syrian army artillery units shelled militant positions in Lahaya village and al-Latamina town, situated about 35 kilometers north of Hama, which the Takfiris were using to monitor, attack and infiltrate into army posts.

Scores of terrorists were killed and injured in the process. Their military hardware and weapons were destroyed as well.

Separately, Syrian troopers thwarted a terrorist attack on the outskirts of al-Hayat village in the western coastal province of Latakia, dealing heavy blows to militant ranks.

According to Press TV, Syria has been gripped by foreign-backed militancy since March 2011. The Syrian government says the Israeli regime and its Western and regional allies are aiding Takfiri terrorist groups wreaking havoc in the country.

On May 21, the General Command of the Syrian Army and Armed Forces announced in a statement that complete security was restored to Damascus and its countryside after al-Hajar al-Aswad district and al-Yarmouk camp were totally purged of Daesh terrorists.

The development was preceded by flushing the Takfiris out of the towns of Yalda, Babbila and Beit Sahem on the southern outskirts of Damascus.

Tags: Syria Israel Homs
Short Link rasanews.ir/201qCm
Share
0
Please type in your comments in English.
The comments that contain insults or libel to individuals, ethnicities, or contradictions with the laws of the country and religious teachings will not be disclosed