Rasa - A dispute between Saudi Arabia and Canada is escalating to new levels after Riyadh abruptly cut ties with Ottawa over its criticism of the Saudi crackdown on dissent, targeting educational exchanges with the North American state. 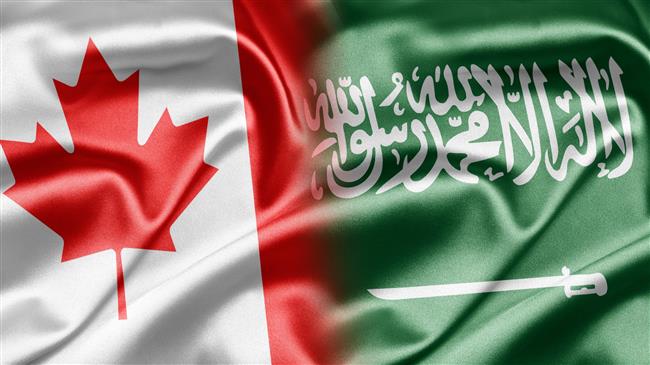 RNA - The dispute broke out on Friday after the Canadian Embassy in Riyadh tweeted that it was “gravely concerned” over a spike in the arrests of human rights campaigners in the kingdom, including gender rights activist Samar Badawi, and called on “Saudi authorities to immediately release them and all other peaceful #humanrights activists.”

Irked by the tweet, the Saudi government on Monday ordered the Canadian ambassador to leave the country within 24 hours and halted trade and investment deals with Ottawa.

Saudi Arabia’s national airline also announced that it was suspending flights to Canada as of August 13.

In yet another escalation, Saudi state media said the kingdom would suspend government-funded scholarships to Canada and move the Saudi nationals already studying there to other countries.

According to Jassem al-Harbash, head of the Education Ministry’s Scholarship Program, more than 7,000 students from Saudi Arabia are enrolled in university programs across Canada.

Reacting to the move, Canadian Foreign Minister Chrystia Freeland said on Monday that “it would be a shame” if Saudi students were “deprived of the opportunity to study” in Canada.

Amid the growing war of words, Saudi Foreign Minister Adel al-Jubeir criticized Canada’s call to free jailed civil society activists and said his country would not tolerate any “interference” in its domestic affairs.

Jubeir tweeted on Monday that Canada’s position was based on “misleading information,” adding that those detained were “subject to Saudi laws that guarantee their rights.”

The dramatic exchanges have also drawn reactions from other states.

The US refused to explicitly take sides in the dispute involving two of its close allies, but asked Saudi Arabia to provide more details on the detention of activists.

“We continue to encourage the government of Saudi Arabia to respect due process and to publicize information on the status of legal cases,” the official added.

A number of European Parliament members in a tweet on Monday supported the Canadian government’s stance and denounced the ongoing human rights violations in Saudi Arabia.

We support the government of @Canada in their condemnation of the #humanrights abuses by #SaudiArabia (I will update the list of names as more colleagues sign on asking @FedericaMog to make a public statement with Canada) cc: @cafreeland@JustinTrudeau https://t.co/8t01neGdXCpic.twitter.com/rPWTgP1I2P
— Marietje Schaake (@MarietjeSchaake) August 6, 2018

Amnesty International also called on Riyadh to “end its crackdown” rather than “lash out with punitive diplomatic and trade sanctions.”

“Now is the time for other governments like the UK and US to join Canada in increasing the pressure for genuine, lasting human rights reforms in Saudi Arabia,” said Samah Hadid, the Middle East director of campaigns at the rights group.

On the other side, Saudi Arabia’s all-time allies Bahrain and the United Arab Emirates as well as the [Persian] Gulf Cooperation Council (GCC) – to which all the three are members – were quick to throw their weight behind Riyadh.

However, Qatar – which has been  caught up in a diplomatic row with Saudi Arabia, Bahrain, the UAE and Egypt – distanced itself from the GCC’s stance.

An official source at Qatar’s Ministry of Foreign Affairs expressed surprise at the statements by GCC Secretary General Abdullatif bin Rashid al-Zayani in support of the Riyadh regime.

The source said that those statements do not express the opinion of the State of Qatar, and that Doha and Ottawa are linked by decades-long strong relations.

The Qatari official stressed the need to protect the right of states and international organizations to express their views, particularly when it comes to violations of human rights and freedom of expression.

The Palestinian Authority also backed Saudi Arabia in the row.

Amid the tensions, a pro-government Saudi Twitter account posted a digitally altered image, apparently showing a plane flying toward the skyline of Toronto, Canada’s largest city, in what was wildly interpreted as Riyadh threatening Canada with a 9/11-style terror attack.

The picture - which was produced by a group called @Infographic_KSA - contained a message in English that read, “He who interferes with what doesn’t concern him finds what doesn’t please him.”

The text “sticking one’s nose where it doesn’t belong!” was also superimposed over the image.

The picture falls short of mentioning what exactly would fail to please Canada, but reminded social media users of the September 11, 2001 terrorist attacks, which saw planes deliberately flown into the New York’s World Trade Center towers and the Pentagon.

Most of the hijackers in that incident were Saudi nationals. Saudi royals have long been accused of having a hand in the attacks.

The tweet was, however, deleted after it sparked outrage online, with social media users pointing out that the image seemed to imply the Sept. 11 attacks. The pro-Saudi account also apologized for the tweet, claiming the plane was meant to symbolize the Canadian ambassador’s return home.

Tags: Canada Saudi Human rights
Short Link rasanews.ir/201qCU
Share
0
Please type in your comments in English.
The comments that contain insults or libel to individuals, ethnicities, or contradictions with the laws of the country and religious teachings will not be disclosed