Rasa - Commander of the Islamic Revolution Guards Corps Ground Force Brigadier General Mohammad Pakpour warned that the IRGC will give a crushing response to any move by the terrorist groups, adding that his forces will even chase the terrorists to their hideouts outside Iran's borders. 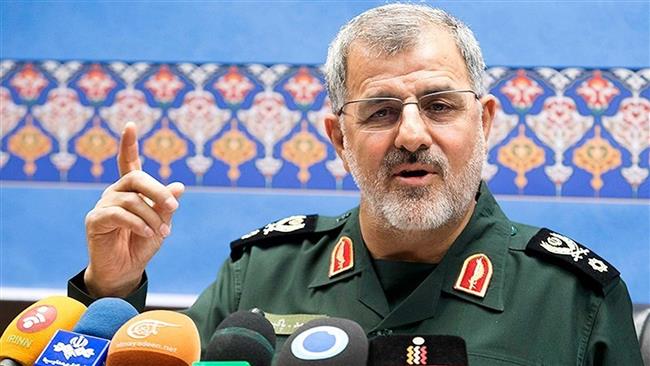 RNA - "Everyone should know that our retaliation for the recent (terrorist) act (by PJAK (the Party for Free Life of Kurdistan) terrorist group) in Marivan (last month) will be crushing. No one knows its place and time but our retaliation will be crushing at any point, including their camp in Northern Iraq," General Pakpour told reporters in Tehran on Monday.

He added that 12 members of a team of PJAK terrorists who had martyred 11 Iranian border guards in Marivan were killed in Kermanshah province early last year, while many more were hunted down in other parts of Northern and Northwestern Iran.

General Pakpour also said that 21 ISIL members were also killed early last year in Western Iran, reminding that 28 Iranian border guards have been martyred in the past 4 months.

In relevant remarks in July, Head of the IRGC Public Relations Department and IRGC Spokesman General Ramezan Sharif warned the PJAK terrorist group and its foreign supporters of harsh revenge for the terrorist attack in Western Iran which martyred 11 IRGC forces.

"Under such conditions that the terrorists, supported by the US and the White House's regional and trans-regional allies, are taking their last breaths, we warn the foreign intelligence organizations and services that a plan to take a strong revenge for the recent incident stands top on the agenda" of the IRGC forces, General Sharif said.

He warned the foreign spy agencies to stop supporting and provoking the criminal terrorist groups into acts against Iran, or wait for "the iron fist of the Iranian security and defense forces, specially the IRGC to make them pay the costs".

According to Fars News Agancy, PJAK terrorist group claimed responsibility for the July attack on an IRGC Ground Force checkpoint in Western Iran.

"Last night a number of anti-revolutionary PJAK terrorist group members opened fire at Dari base near the town of Marivan by long-range shots which led to an explosion in a cache of ammunition, and unfortunately, 11 local IRGC and Basiji (Volunteer) forces of Kurdistan province were martyred and 8 others were wounded," Governor of Kurdistan province Mohammad Shafiyee told at the time.

He added that a number of PJAK terrorists were also killed and wounded during the clashes, and several others fled the scene.

Tags: PJAK Kermanshah IRGC Terrorist
Short Link rasanews.ir/201qCS
Share
0
Please type in your comments in English.
The comments that contain insults or libel to individuals, ethnicities, or contradictions with the laws of the country and religious teachings will not be disclosed