Rasa - Yemeni army forces, backed by allied fighters from Popular Committees, have fired a short-range domestically-manufactured missile at a Saudi military base in the kingdom’s southwestern Jizan province, in retaliation for the Saudi regime’s campaign against the impoverished country. 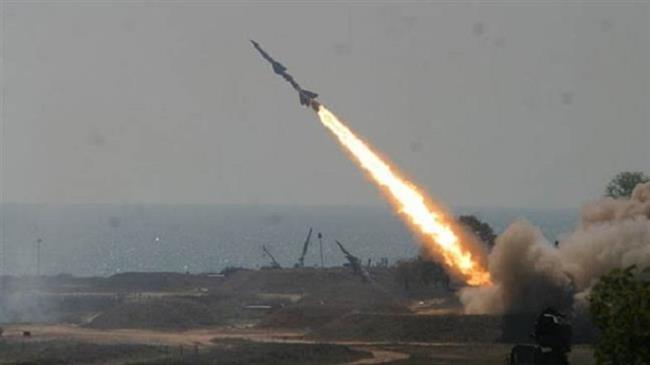 RNA - Yemen’s Arabic-language al-Masirah television network, citing a military source, reported that the Zelzal-1 missile, with an average range of 150 kilometers, was launched against a military base in the al-Khobe district, on Monday.

The report added that the missile was aimed at a gathering of Saudi soldiers in the area, but did not said the number of possible casualties and the extent of damage the projectile inflicted on the base.

Separately, Yemeni snipers managed to shoot dead a Saudi trooper in Jabal al-Doud district in the same province, al-Masirah said, adding that three other Saudi soldiers had been killed by Yemeni sharpshooters in Jazan’s al-Mash’al military base.

Meanwhile, Ansarullah news portal reported that Yemeni army forces destroyed at least one military vehicle after the targeted with rocket fire west of al-Sadis military base in Saudi Arabia’s southern province of Najran. The reported added that all Saudi soldiers onboard the vehicle had been killed in the attack.

Saudi Arabia and some of its allies launched a brutal war, code-named Operation Decisive Storm, against Yemen in March 2015 in an attempt to reinstall Abd Rabbuh Mansur Hadi, Yemen’s former president and a staunch ally of Riyadh, and crush the Houthi Ansarullah movement.

According to Press TV, the movement, which is a significant aid to the Yemeni army in defending the country against the invading forces, has been running state affairs in the absence of an effective administration during the past three years.

The imposed war initially consisted of a bombing campaign but was later coupled with a naval blockade and the deployment of ground forces into Yemen.

The Saudi-led aggression has also taken a heavy toll on the country's infrastructure, destroying many hospitals, schools, and factories. The United Nations has already said that a record 22.2 million Yemenis are in dire need of food, including 8.4 million threatened by severe hunger.

Tags: Yemen Saudi
Short Link rasanews.ir/201qCP
Share
0
Please type in your comments in English.
The comments that contain insults or libel to individuals, ethnicities, or contradictions with the laws of the country and religious teachings will not be disclosed