US not trustworthy for negotiations after quitting nuclear deal

Rasa - Iranian President Hassan Rouhani says the US administration is no more able to prove its trustworthiness for any negotiations after its withdrawal from the Iran nuclear deal and a number of other international treaties. 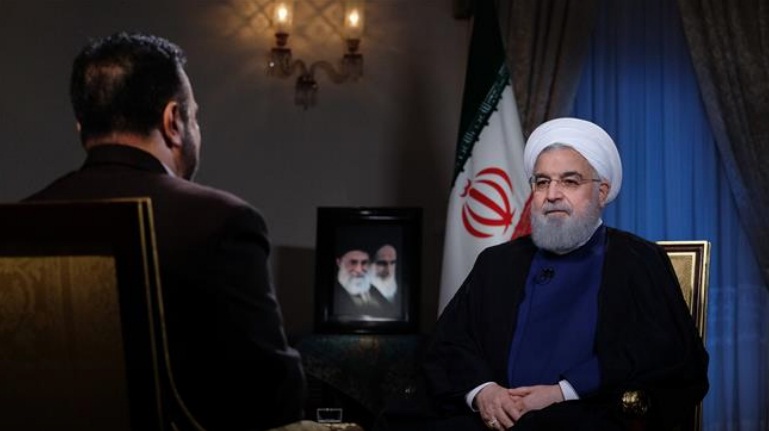 RNA - Rouhani made the remarks in a live televised interview on Monday, in which he answered questions on Iran's domestic issues and foreign developments, particularly after the US withdrawal from a landmark nuclear agreement, officially known as the Joint Comprehensive Plan of Action (JCPOA) in May.

"We are always in favor of diplomacy and talks ... But talks need honesty ... The US re-imposes sanctions on Iran and pulls out of the nuclear deal, and then wants to hold talks with us," the Iranian president said.

He added that the US must first prove itself willing to solve problems through negotiations after its withdrawal from the JCPOA.

"If you're an enemy and you stab the other person with a knife and then you say you want negotiations, then the first thing you have to do is remove the knife," he added.

The Iranian president further stated that a recent call by US President Donald Trump for direct talks with Iran was only aimed at creating division in the country.

"Trump's call for direct talks is only for domestic consumption in America ... and to create division in Iran," Rouhani pointed out.

"They want to launch psychological warfare against the Iranian nation," he added.

In reaction to the US president, Iran's Foreign Minister Mohammad Javad Zarif said the US should blame itself for ending talks with Iran when it left the JCPOA.

During the televised interview, Rouhani said by withdrawing from the JCPOA, Trump aimed to make Iran leave the nuclear accord as well to lose all it had achieved through the deal.

He said Trump did not want its anti-Iran sanctions to be unilateral and wanted the entire world to impose sanctions on Iran, but he failed to achieve this goal.

“Even today, which sanctions have been re-imposed [by the United States], Europe has stood against America. This is while Europe was always an ally of America,” the Iranian president said.

Noting that the United States will regret imposing sanctions on Iran, Rouhani emphasized that the Iranian nation can overcome all economic hardships through unity.

According to Press TV, the United States plans to re-impose a first round of sanctions against Tehran, which were lifted under the multilateral nuclear agreement signed between Iran and the P5+1 group of countries in 2015, on Tuesday. The sanctions will cover Iran’s purchases of dollars, its trade in gold and precious metals, and its automotive sector.

Trump announced on May 8 that Washington was walking away from the nuclear agreement, officially known as the Joint Comprehensive Plan of Action (JCPOA), and that he plans to reinstate US nuclear sanctions on Iran and impose "the highest level" of economic bans on the Islamic Republic.

Tags: US Rouhani Trump Hassan Rouhani
Short Link rasanews.ir/201qCO
Share
0
Please type in your comments in English.
The comments that contain insults or libel to individuals, ethnicities, or contradictions with the laws of the country and religious teachings will not be disclosed