Zarif: Trump's offer of negotiations with Iran only PR stunt

Rasa - Iran's Foreign Minister Mohammad Javad Zarif says a recent proposal by US President Donald Trump to enter into negotiations with Iran over the country’s nuclear issue is nothing but a “publicity stunt” as he cannot be trusted with any new talks after withdrawing from Iran nuclear deal. 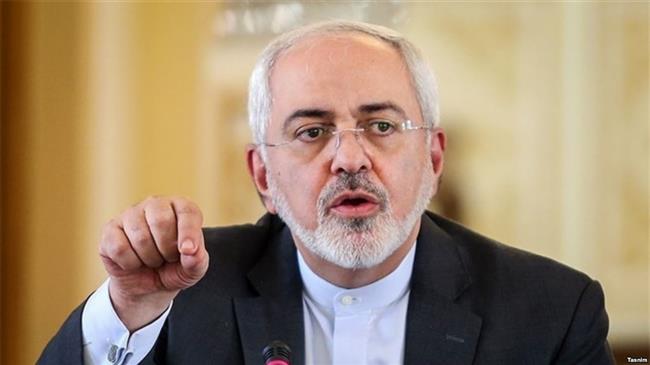 RNA - Addressing a ceremony to mark the National Journalists' Day in Tehran on Monday, Zarif pointed to Washington's withdrawal from the historic nuclear accord, known as the Joint Comprehensive Plan of Action (JCPOA), saying, "Who will believe that Trump wants to negotiate with Iran?"

“The hours of our negotiations with America were perhaps unprecedented in history; then Trump signs something and say all [those negotiations] are void; can you negotiate with this person? Is this [negotiations offer] anything but a publicity stunt?” he asked.

Iran's foreign minister also stated that nearly 60 percent of the American people believed that Washington should not withdraw from the JCPOA while more than 180 countries expressed their support for the deal as well.

Trump Administration wants the world to believe it's concerned about the Iranian people. Yet the very first sanctions it reimposed have canceled licenses for sales of 200+ passenger jets under absurd pretexts, endangering ordinary Iranians. US hypocrisy knows no bounds.
— Javad Zarif (@JZarif) August 6, 2018

Washington seeks to create the atmosphere through propaganda that it is willing to negotiate with Tehran, but the Iranian people do not accept this, Zarif said.

In reaction to the US president, Zarif said the US should blame itself for ending talks with Iran when it left the JCPOA.

"Iran & US had 2 yrs of talks. With EU/E3+Russia+China; we produced a unique multilateral accord -- the JCPOA. It’s been working. US can only blame itself for pulling out & leaving the table. Threats, sanctions & PR stunts won’t work. Try respect: for Iranians & for int'l commitments," said Zarif in a post on his official Twitter account.

Elsewhere in his remarks, the Iranian foreign minister said Trump and his main allies in the Middle East have become isolated by their policies against Iran.

"Today, all speak about the isolation of Trump, [Israeli Prime Minister Benjamin] Netanyahu and [Saudi Crown Prince Mohammad] bin Salman. These three persons are the symbol of suppression, violence and mistrust in the world," Zarif said.

He added that all countries across the world have announced that they would not follow US policies against Iran, stressing, "The fact is that in today's world, it is the US that has become isolated."

The United States plans to re-impose a first round of sanctions against Tehran, which were lifted under the multilateral nuclear agreement signed between Iran and the P5+1 group of countries in 2015, on Tuesday. The sanctions will cover Iran’s purchases of dollars, its trade in gold and precious metals, and its automotive sector.

Trump announced on May 8 that Washington was walking away from the nuclear agreement, officially known as the Joint Comprehensive Plan of Action (JCPOA), and that he plans to reinstate US nuclear sanctions on Iran and impose "the highest level" of economic bans on the Islamic Republic.

EU deeply regrets re-imposition of US sanctions on Iran

The European Union on Monday voiced its deep regret over the US renewal of sanctions on Iran, saying the 28-nation bloc and other signatories would work on keeping financial channels with Iran open.

"The JCPOA is working and delivering on its goal, namely to ensure that the Iranian program remains exclusively peaceful, as confirmed by the International Atomic Energy Agency (IAEA) in 11 consecutive reports," the statement read.

"It (the JCPOA) is a key element of the global nuclear non-proliferation architecture, crucial for the security of Europe, the region, and the entire world," it added.

According to Press TV, the EU called on Iran to continue to fully implement all its nuclear commitments under the nuclear deal, saying, "We are determined to protect European economic operators engaged in legitimate business with Iran in accordance with EU law and with UN Security Council resolution 2231."

The British Foreign Office also took to Twitter later on Monday, noting that the Iranian nuclear deal is "crucial for the security of Europe, the region, and the entire world."

The Iranian nuclear deal is "crucial for the security of Europe, the region, and the entire world"

Tags: Iran Zarif Trump
Short Link rasanews.ir/201qCM
Share
0
Please type in your comments in English.
The comments that contain insults or libel to individuals, ethnicities, or contradictions with the laws of the country and religious teachings will not be disclosed