Rasa - Human Rights Watch (HRW) has warned against the threat of natural disasters facing the Rohingya Muslim refugees living in an overcrowded mega camp in Bangladesh’s border region near Myanmar, calling on Dhaka to relocate the hapless refugees to safer places. 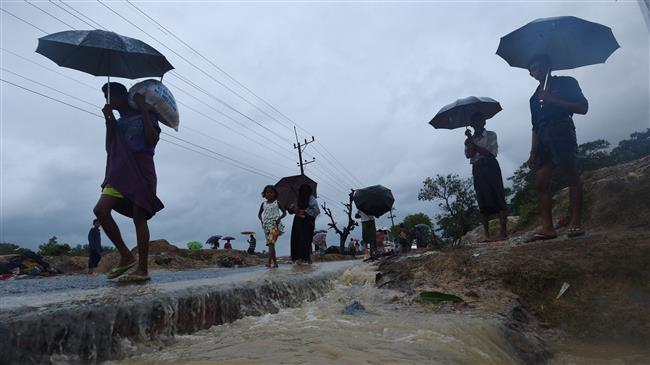 RNA - The US-based rights group said in a 68-page report on Monday that the Muslim refugees – who have fled a state-sponsored ethnic cleansing campaign at home in Myanmar – should not have to face floods and landslides, urging the Bangladeshi officials to provide them with better shelters as well as adequate education.

Almost one million Rohingya Muslims have fled their homes in Myanmar’s Rakhine State to take refuge  in border camps in Bangladesh’s Cox’s Bazar.

Some 700,000 of them arrived in Bangladesh after the latest military crackdown on the stateless minority started in August last year.

The report points out the risks of communicable diseases, fires, community tensions and sexual violence in packed areas.

“It’s an incubation for contagious disease, for social dysfunction, domestic violence for example, and things like fire,” Bill Frelick,

refugee rights director at HRW, told reporters while unveiling the report dubbed, “‘Bangladesh Is Not My Country’: The Plight of Rohingya Refugees from Myanmar.”

“Immediately what is needed is relocation,” he insisted.

According to Press TV, HRW said it had identified six feasible sites that could accommodate 263,000 refugees living in dire conditions.

It warned, however, against moving the refugees to an uninhabitable island in the Bay of Bengal called Bhasan Char amid reports of such a plan.

Other recommendations by HRW were for Bangladeshi authorities to provide the Rohingya Muslims forced out of Myanmar with legal refugee status, freedom of movement as well as cyclone shelters.

The report called for greater contributions from donor governments, agencies and NGOs to help improve the conditions. It said an appeal for $136.6 million for shelter and non-food data-x-items was only 14 percent funded as of last month.

Tags: bangladesh Rohingya
Short Link rasanews.ir/201qCK
Share
0
Please type in your comments in English.
The comments that contain insults or libel to individuals, ethnicities, or contradictions with the laws of the country and religious teachings will not be disclosed