Rasa - Hundreds of Yemeni women have taken into the streets of the capital, Sana'a, to denounce deadly Saudi-led aerial assaults, the latest of which hit the port city of Hudaydah. 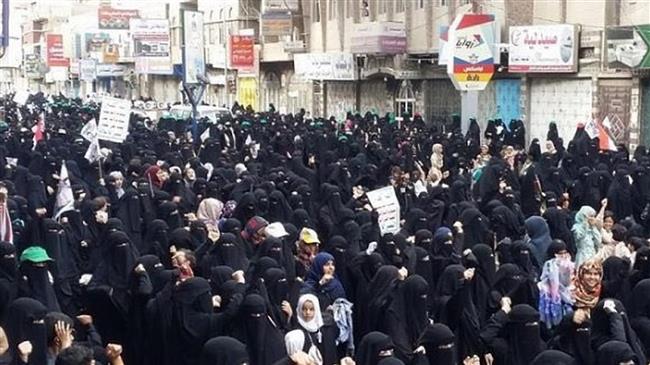 They also chanted slogans in condemnation of the Saudi war, which has claimed the lives of thousands of Yemenis over the past three years.

Some of the protesters held up rifles to underline the need for resistance against the aggressors.

Yemen is now suffering from the worst humanitarian crisis in the world due to the Saudi aggression and siege.

In its latest war crime in Yemen, Saudi warplanes struck a hospital and a fishing harbor in Hudaydah on Thursday.

A source at Hudaydah's health office told the Middle East Eye news portal that the air raids had killed 60 people and wounded more than 100 others.

According to Press TV, the source also noted that medics were struggling to respond to patients' needs in Hudaydah.

"The hospitals suffer from lack of medicines, equipment and doctors because of the war," he said. "I appeal to international organizations to support the health system in Hudaydah, to help people when the Saudis target them, as this is not the first time that airstrikes target people."

Backed by Saudi-led airstrikes, Emirati forces and pro-Hadi militants launched the Hudaydah offensive on June 13 despite international warnings that it would compound the impoverished nation’s humanitarian crisis.

Saudi Arabia claims that the Houthis are using Hudaydah for weapons delivery, an allegation rejected by the fighters.

Tags: Yemen Women Saudi
Short Link rasanews.ir/201qC9
Share
0
Please type in your comments in English.
The comments that contain insults or libel to individuals, ethnicities, or contradictions with the laws of the country and religious teachings will not be disclosed