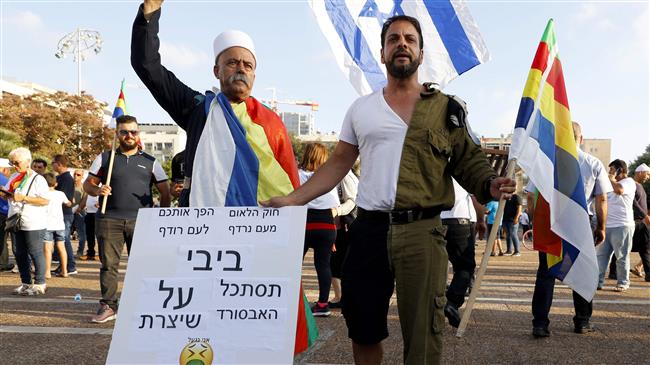 While addressing the protesters, Israeli Druze spiritual leader Sheikh Muafak Tarif said that the argued that the new legislation makes them second-class citizens.

The protesters accuse the Tel Aviv regime of racism and discrimination against other ethnicities.

Last week, Two Druze Israeli officers resigned from the military in protest against the controversial bill.

Earlier in July, Israel’s parliament (Knesset) adopted a controversial bill that declares the occupying entity “the nation-state of the Jewish people,” in what is widely criticized as an apartheid measure that could lead to discrimination against its own Arab population.

Besides officially designating Israel as a “state” exclusively for the Jews, the law defines occupied Jerusalem al-Quds as the “capital” of Israel, downgrades the status of the Arabic language and encourages the promotion of the regime’s settlements — which have been built on occupied land and thus viewed as unlawful by the world community.

A senior Iranian diplomat says Israel’s adoption of the law that is further proof of the regime’s apartheid nature, urging international pressure on Tel Aviv to cancel the law.

According to Press TV, the law had drawn criticism by a wide range of NGOs and rights groups as a racist bill that would divide the society. Arabs in the occupied territories form about 20 percent of the population.

Tensions have been running high along the fence separating Gaza from the Israeli-occupied territories since March 30, which marked the start of a series of protests, dubbed “The Great March of Return,” demanding the right to return for those driven out of their homeland.

The Gaza clashes reached their peak on May 14, the eve of the 70th anniversary of the Nakba Day (the Day of Catastrophe), which coincided this year with the US embassy relocation from Tel Aviv to occupied Jerusalem al-Quds.

Israeli fire has taken the lives of more than 150 Palestinians since March 30.

Tags: Jewish state law Israel
Short Link rasanews.ir/201qC6
Share
0
Please type in your comments in English.
The comments that contain insults or libel to individuals, ethnicities, or contradictions with the laws of the country and religious teachings will not be disclosed