Rasa - Israel has shut down a field hospital specialized in treating anti-Damascus terrorists as Syrian government forces continue to liberate more areas in the Golan Heights. 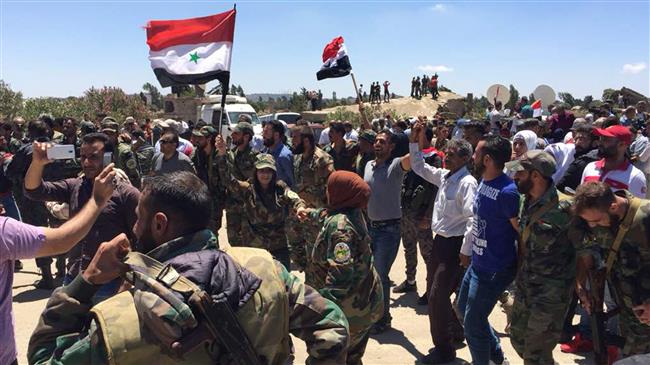 RNA - In a statement released on Friday, the Israeli military said it had started evacuating the Mazor Ladach clinic, which has been set up in August 2017 to provide medical care to terrorists fleeing into Israel.

The statement added that some 6,800 terrorists had been treated in the clinic.

It also said that the hospital had been set up in cooperation with an American humanitarian organization to respond "the lack of proper medical options in Syria".

Israel, the statement said, holds the Syrian government responsible for "all that transpires in Syrian territory” while maintaining a policy of non-intervention, adding that Tel Aviv was “following events in the area [Golan Heights] and is prepared for any eventuality."

Over the past few years, Israel is believed to have been providing weapons to anti-Damascus terrorists. It has also attacked military targets in Syria in what is considered as an attempt to prop up terrorist groups that have recently been suffering heavy defeats against Syrian government forces.

In 2013, Israel launched the so-called Operation Good Neighbor to provide basic medical treatment to the wounded anti-Damascus Takfiri terrorists in its own medical facilities.

However, latest reports say the Israeli army has begun to scale back the operation as Syria deals more blows to terror outfits on the battlefield near the occupied territories in Golan.

According to Press TV, Israel has recently beefed up its military presence on the occupied side of Syria’s Golan Heights, deploying more military equipment and forces to the region. It has also increased its aerial assaults against the Syrian army.

Late last month, Israel evacuated hundreds of White Helmets volunteers and their family members to Jordan for resettlement in the UK, Canada and Germany. The group faces accusations of cooperating with Takfiri terrorists and staging false flag gas attacks in Syria.

The evacuation was largely seen as an evidence of the much-reported collaboration between Tel Aviv and anti-Damascus terrorists.

On Thursday, Israeli minister of military affairs admitted that the government of President Bashar al-Assad was regaining control of the Syrian territory and that stability is returning to Golan.

Avigdor Lieberman said the situation in Syria was returning to how it was before the conflict began in 2011.

Tags: Terrorist Syria Israel Golan
Short Link rasanews.ir/201qBx
Share
0
Please type in your comments in English.
The comments that contain insults or libel to individuals, ethnicities, or contradictions with the laws of the country and religious teachings will not be disclosed