Rasa - Yemen has fired five missiles at southern Saudi Arabia shortly after a coalition of invaders led by the kingdom staged deadly strikes against the country’s al-Hudaydah Province. 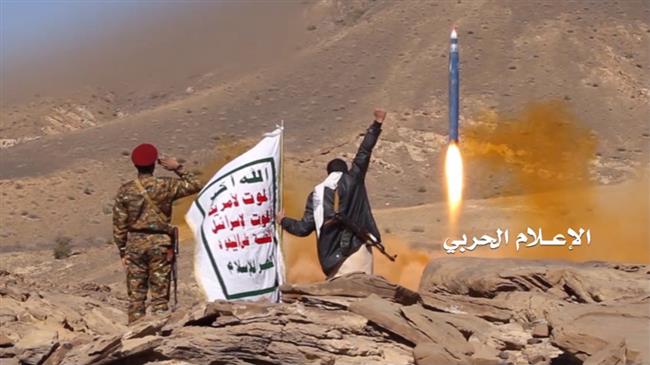 RNA - The Yemeni army and its allies fired the projectiles at the kingdom’s southwestern tip, which comprises the Jizan, Najran, and Asir regions, over Thursday and Friday.

The missiles were all of the Zalzal type, which the country has been using in its retaliatory attacks against Saudi Arabia.

It is not yet clear whether the retaliation has resulted in any human or material losses.

Other reports emerging from the battleground showed that the army and its allied popular fighters had clashed with Saudi Arabian forces and Saudi-backed militants in Derihemi District along Yemen’s west coast on Saturday.

Saudi Arabia and its allies invaded Yemen in March 2015 to restore power to its former Riyadh-backed officials. The invasion has killed thousands, and placed the country on the edge of outright famine.

According to Press TV, Yemen’s Supreme Revolutionary Committee, founded by Yemen’s popular Houthi Ansarullah movement, has named the fourth year of the invasion “the Year of Missile Rain” as the impoverished country keeps up its struggle against the invaders. The Houthis likewise defend the country against the Saudi-led invasion.

The retaliatory missile barrage came shortly after at least 55 people were killed when the coalition’s warplanes hit a hospital and a fishing harbor in al-Hudaydah.

A day earlier, at least nine fishermen had been killed after Saudi-led warplanes targeted their ship off the coast of Hudaydah.

The port city of Hudaydah, the province’s capital, receives the majority of Yemen’s imports, prompting international bodies to warn the invaders against keeping up their attacks.

In a statement published on Friday, Lebanon’s Hezbollah resistance movement condemned the attack on the hospital.

"The attack by the Saudi and American aggressors reveals the moral devolution of the coalition and its heavy defeat,” read the statement.

"The brutal atrocity has bewildered the world,” it added.

The United States has been lending generous arms supplies, bombing coordinates, aerial refueling, and commando support to the invasion.

Tags: Hudaydah Yemen Hezbollah Saudi
Short Link rasanews.ir/201qBv
Share
0
Please type in your comments in English.
The comments that contain insults or libel to individuals, ethnicities, or contradictions with the laws of the country and religious teachings will not be disclosed