Rasa - A Palestinian has been shot dead and 120 have been wounded after Israeli forces opened fire on thousands of peaceful demonstrators during a march in the besieged Gaza Strip. 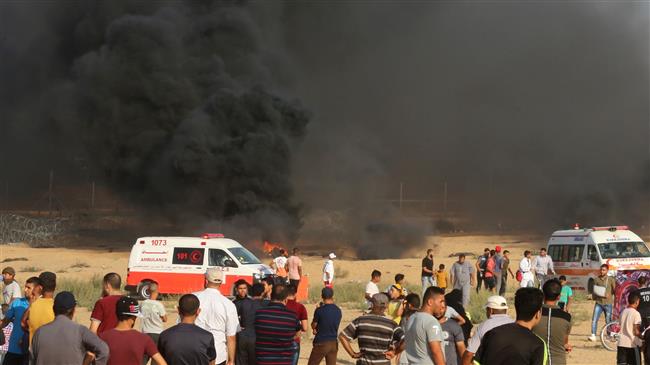 RNA - The Gaza Health Ministry said that Ahmed Yaghi, 25, was killed by a sniper near the fence that separates the occupied territories from the east of Gaza City on Friday.

Health Ministry sources noted that 50 of the wounded Palestinian protesters were taken to nearby hospitals, while the rest were treated at the scene of the protests. Most of the casualties were due to the Israeli troops' use of live fire.

The Israeli military said some 8,000 people took part in the protests at five sites along the fence.

According to Press TV, Israeli fire has taken the lives of at least 157 Palestinians since March 30.

Tags: Palestinian Israel
Short Link rasanews.ir/201qBu
Share
0
Please type in your comments in English.
The comments that contain insults or libel to individuals, ethnicities, or contradictions with the laws of the country and religious teachings will not be disclosed