World Must Fight Against US Economic Dictatorship

Rasa - The United States has launched a global trade war against everything and everyone on the planet, largely against the European Union, Russia, China, Canada and Mexico. 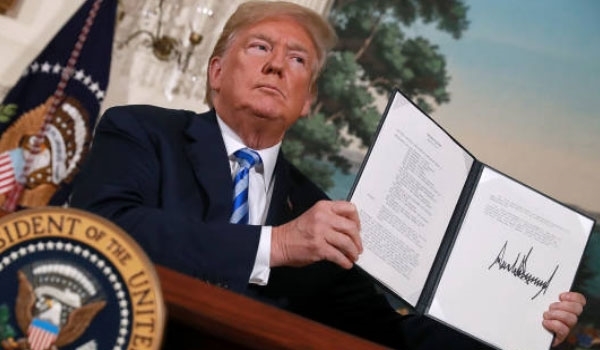 RNA - The US is also gearing up for re-imposition of economic sanctions against Iran so that Tehran accepts to re-negotiate the 2015 nuclear deal it signed with the world powers. There is much tension between the two countries since President Donald Trump backed out of the 2015 nuclear deal in May, but the scenario changed when Trump called for talks without preconditions. Tehran has ruled out any talks with vindictive Trump, but sanctions are forthcoming either way.

To fight back, Iran filed a complaint with the International Court of Justice to hold the US accountable for its unlawful re-imposition of unilateral sanctions. Meantime, the EU, Britain, France and Germany, China and Russia have repeatedly reaffirmed their support "to the continued full and effective implementation of the JCPOA by all sides".

The EU has even given support for the deal by giving European firms legal cover to operate in Iran. The European Council has endorsed the update of the blocking statute annexe on the nuclear deal with Iran. The "blocking statute" forbids EU firms from complying with US sanctions, allowing them to recover damages from such penalties and nullifying any foreign court rulings against them. But is this enough?

The blocking statute is due to enter force on August 6, when the first set of US sanctions are due. The second set is due November 4, just before US legislative elections. This action is clearly telling the whole world that the US administration is becoming even weaker and showing little ability to settle disputes with Iran and other countries, and has nothing left except extremely vicious warmongering and bullying tactics.

The US is losing its mind and now it is time to get united to fight against this economic dictator in the world and the economic dictatorship represented by the US government. This behavior has fully violated the rules and regulations of the United Nations and the rest of the global community.

The US uses economic sanctions to impose its will on other nations. It takes illegal actions as it desires and cares not for International Law or the UN Charter, or the General Assembly resolutions, or the Security Council resolutions. This kind of dictatorship must be seriously condemned and confronted by the UN and all member countries.

The anti-Iran measures taken by the US are much too systematic, deliberate, and free of control by diplomatic morality and conscience. What the US government is showing is really an under par mentality, and like a dictator is making wrong divisions based on “America First” war on diplomacy. This scenario must get adequate attention from the international civil society because nobody can predict what further dangerous and risky steps will be taken by the “dictator-in-chief” at the White House in order to “milk” Saudi Arabia and appease Israel.

According to Fars News Agancy, treating Iran as an enemy would wreak havoc on western interests. The Iranian government has responded in a very firm attitude that Iran will not yield to US pressures to re-negotiate the nuclear deal or stop supporting Syria, Iraq and the resistance front in the war against foreign-backed terrorism, Israeli Zionism and expansionism, Saudi Wahhabism, and American militarism.

It is very clear that the economic dictatorship represented by the US is very negative for global development and contributes strong destructive factors to the world business and energy society. The whole world has to unite against the Trump White House and their economic dictatorship. Today, it is the economy of Iran they are after. Tomorrow, it could be the economy of another nation, most probably China and Russia. The time to fight back is now.

Tags: US Iran Trump
Short Link rasanews.ir/201qBr
Share
0
Please type in your comments in English.
The comments that contain insults or libel to individuals, ethnicities, or contradictions with the laws of the country and religious teachings will not be disclosed