US 'doesn't know what it's doing in our backyard'

Rasa - Iranian Foreign Minister Mohammad Javad Zarif has criticized the presence of American military forces in the Persian Gulf and has questioned why US forces are “in Iran's backyard” some 7,000 miles away from home. 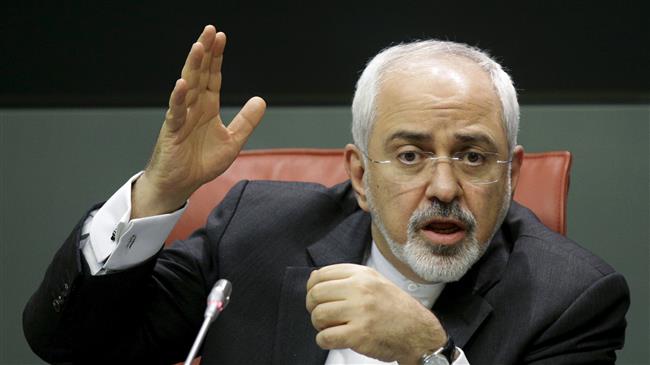 RNA - Zarif took to Twitter on Thursday to slam the US navy for using the fictitious name of "the Arabian Gulf" to refer to the Persian Gulf.

The Iranian foreign minister referred to the historical background of the name Persian Gulf, saying that the waterway has been called as such “2,000 yrs longer than US has existed.”

“US Navy can’t seem to find its way around our waters,” Zarif tweeted. "Perhaps because it hasn’t figured out its name: Persian Gulf, as it's been called for 2,000 yrs longer than US has existed. Or maybe it doesn't know what it's doing in our backyard, 7,000 miles from home.”

Zarif's remarks came shortly after chief spokesman for US Central Command William Urban used the fabricated "Arabian Gulf” during an interview with the CNN.

Iran has designated April 30 as National Persian Gulf Day to highlight the fact that the waterway has been referred to by historians and ancient texts as "Persian" since the Achaemenid Empire was established in what is now modern day Iran.

While historical documents show that the waterway has always been referred to as the “Persian Gulf,” certain Arab states and their allies have recently mounted efforts to remove “Persian” from the name of the strategic waterway.

Zarif , who is in Singapore to take part in the 51st Association of Southeast Asian Nations (ASEAN) ministerial meeting, also lambasted the US for withdrawing from the 2015 Iran nuclear deal and re-imposing "unilateral" sanctions against Tehran.

US President Donald Trump announced on May 8 that Washington was walking away from the deal which is officially known as the Joint Comprehensive Plan of Action (JCPOA) and was signed between Iran and the P5+1 group of countries - the US, Britain, France, Russia, China and Germany.

The US president also said that he planned to reinstate a series of economic sanctions against Iran which he said would be implemented "at the highest level".

According to Press TV, Zarif highlighted the international mistrust of the US, saying that Washington has become addicted to sanctions.

He said while the US was preparing to reimpose sanctions against Iran, many countries were already trying to find ways around the sanctions and adopt innovative ways to pursue their own policies.

Pointing to his meetings with foreign officials on the sidelines of the ASEAN meeting, Zarif said that "all countries whose officials I met with stressed maintaining their independence from US policies regarding the JCPOA and preserving it as a diplomatic achievement."

Zarif had separate meetings with the Southeast Asian nation’s Prime Minister Lee Hsien Loong as well as with the foreign ministers of Russia, Japan, Turkey, the Philippines, Malaysia and Vietnam.

Tags: US Iran Zarif
Short Link rasanews.ir/201qBo
Share
0
Please type in your comments in English.
The comments that contain insults or libel to individuals, ethnicities, or contradictions with the laws of the country and religious teachings will not be disclosed