Official: Trump Shooting at Allies, Foes in All Directions

Rasa - Secretary of Iran's Expediency Council Mohsen Rezayee underlined that the US president is acting in such a confused manner that he does not distinguish between friends and foes, and vowed that Donald Trump's policies will soon backfire at him. 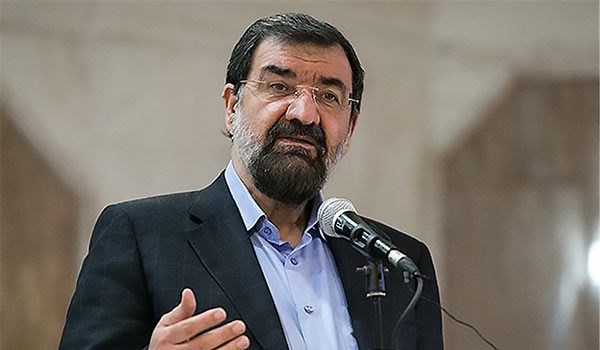 RNA - "Trump is shooting in every direction and targets, towards both his friends and enemies," Rezayee, former commander of the Islamic Revolution Guards Corps (IRGC), wrote on his Twitter account on Friday.

He underlined that the US president is biting off more than he can chew, and said, "President Trump is fighting alone against the whole world."

Rezayee said that Trump is either increasing tariffs on the EU, China and Canada ('s products) or he is imposing sanctions on countries like Russia, Iran and Turkey, adding, "One cannot bite off more than they can chew."

"If sanctions and tariffs introduced by Trump show no effectiveness, both US economy and its remaining international reputation will be ruined," he said.

According to Fars News Agancy, the program that mainly aims to make the country "unsanctionable" has been developed in contrast to the US sanctions program and has reportedly been edited seven times so far, several MPs told FNA.

Information obtained by FNA reveals the program offers a package that also involves social and cultural measures to reinvigorate the country's economy and infrastructure against the US sanctions that come into effect from 90 to 180 days after their re-imposition and seek to wear off Iran's economy step-by-step.

Tags: Iran Trump
Short Link rasanews.ir/201qBn
Share
0
Please type in your comments in English.
The comments that contain insults or libel to individuals, ethnicities, or contradictions with the laws of the country and religious teachings will not be disclosed