Why is Israeli 'nation-state' law so much of a big deal?

Rasa - The Israeli parliament, the Knesset, adopted a controversial bill on May 19 that declared Israel “the nation-state of the Jewish people," in what was widely criticized as an apartheid measure discriminating against the Arab population. 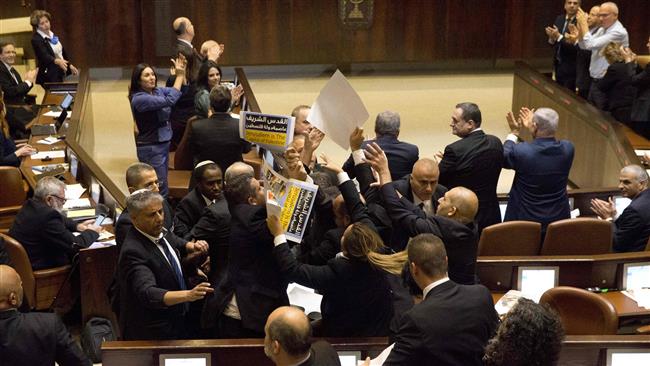 RNA - The law was passed by a vote of 62-55 after a long and stormy debate, prioritizing “Jewish” values over democratic ones in the occupied territories.

The so-called "Basic Law" gives only Jews the right to self-determination. It allows the Israeli regime to expand its annexation of Palestinian lands in the occupied West Bank and East Jerusalem al-Quds and views Jewish-only settlement expansion as a "national value."

Political analysts believe the legislation puts another nail in the coffin of peace with the Palestinians and discards any pretense of democracy in Israel.

S Mubashir Noor, a freelance journalist based in Pakistan, wrote in a recent article that the unconditional US support for Israeli Prime Minister Benjamin Netanyahu had emboldened him to ignore all international laws and conventions.

Buoyed by the unconditional support of US President Donald Trump for his regime, including the controversial relocation of the US embassy to Jerusalem al-Quds, "Netanyahu has given legal cover to Israel’s long-standing policy of social stratification based on race," he wrote, adding, "All that’s missing are separate drinking fountains for Arabs and Jews.”

Noor said confident that Washington will veto any retaliatory UN sanctions, Netanyahu remains oblivious to the fact that marginalizing both Jews and Arab-Israelis will sow nothing but strife for future generations.

The new Israeli law, which had been bouncing around the Israeli parliament since 2011, contradicts biblical teachings and religious standards as it excludes the word “God” from the text.

"This is unsurprising as the founders of Zionism were atheists who did not perceive Jews and Judaism as mutually inclusive terms,” Noor wrote.

Palestinian members of the Knesset have described the legislation's adoption as an effort to sabotage the Palestinian "story and narrative."

"It's an attempt at destroying the entire rhetoric of historic Palestine … it stands against an entire people," Ahmad Tibi, a Knesset member, told Qatar’s al-Jazeera news channel.

According to Tibi, Palestinians have long been treated as inferior to Jewish citizens - and the new law will make this even easier.

"Israel was never democratic to begin with," he said, adding, "It was racist in its policies, actions and laws. What's new is that this law is a Basic Law."

Since Israel defined itself as "Jewish and democratic" in 1958, the "Jewish nature" of the entity had always been a point that Palestinians adamantly opposed, but the new law took it a step further, Tibi said. "It is the definition of apartheid," he noted.

Aida-Touma Suleiman, another Knesset member, said, "We now expect to see a storm of legal proposals that are racist in nature."

"We must be ready to face them and fight them in parliament and on the public level as well," she said.

Suleiman also said the Israeli Knesset has never been a place of privilege to Arabs but has "served merely as one of the various spaces where we battle, struggle and strife."

She said Palestinians face a long "battle of fate" and difficult path towards scrapping the law.

"The law oppresses me and oppresses the population that sent me to the Knesset,'' said Israeli Arab lawmaker Zouheir Bahloul who resigned on Saturday.

He said the Knesset had become a rubber stamp of exceptional and racist legislation, adding he would run from the chamber "as one runs from raging fire."

Palestinian citizens of Israel are planning a series of actions in a bid to have the controversial law canceled.

Their lawmakers have so far penciled in a meeting with EU officials in Brussels and plan to work with various United Nations bodies and parliaments.

Meanwhile, a number of Druze Israeli officers have resigned from the military in protest at the controversial bill.

On Tuesday, Israeli Chief of Staff Lieutenant General Gadi Eisenkot responded to an unprecedented wave of protests by Druze commanders, urging them to leave controversial political matters out of the military.

According to Press TV, Diana Buttu, a lawyer and policy adviser at Al-Shabaka: the Palestinian Policy Network, said neither a supreme court ruling nor a call to the international community is going to change the reality on the ground for Palestinians.

The EU and the UN can only issue condemnations, but that would be the "extent of it," given Washington's veto power at the UN Security Council, the expert added.

Since coming to office, Trump has been developing an even warmer relationship with Israel than previous US presidents.

According to Buttu, from Trump's recognizing of Jerusalem al-Quds as Israel's so-called capital to his "deal of the century" plan, the occupying regime's passing of the new law seems to have come at an optimal timing.

Tags: Palestinian Israel
Short Link rasanews.ir/201qBd
Share
0
Please type in your comments in English.
The comments that contain insults or libel to individuals, ethnicities, or contradictions with the laws of the country and religious teachings will not be disclosed