Israel's Lieberman admits Assad back in charge in Syria

Rasa - Israeli minister of military affairs has admitted that the government of President Bashar al-Assad is regaining control of the Syrian territory and that stability is returning to the occupied Golan Heights. 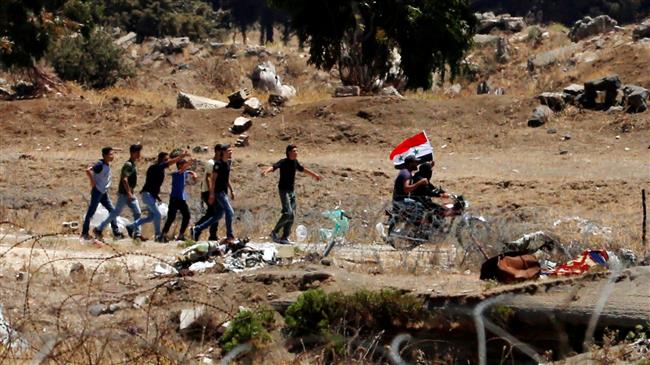 RNA - The situation in Syria is returning to how it was before the conflict began in 2011, Avigdor Lieberman told reporters on Thursday while visiting Israeli military positions near Tzefat.

"From our perspective, the situation is returning to how it was before the civil war, meaning there is a real address, someone responsible, and central rule," he said.

Backed by its allies, namely Iran and Russia, the Syrian government has stepped up its gains against foreign-backed Takfiri terrorist groups on several fronts.

Israel is especially concerned about Syria’s advances against militants in the south near the occupied territories in Golan.

Tel Aviv has recently beefed up its military presence on the occupied side of Syria’s Golan Heights, deploying more military equipment and forces to the region.

The regime has also increased its aerial assaults against the Syrian army in what is widely viewed as an attempt to prop up anti-Damascus terrorists.

Elsewhere in his remarks, the Israeli minister of military affairs stressed that the residents of the occupied Golan should be less wary of a potential flare-up in the region.

“It is also Assad's interest, because he understands what will happen if it does not return to the previous situation and I assume that he will make his own decisions," Lieberman added.

He also claimed that Israel does not "interfere or intervene in Syria's internal affairs," adding, however, "this is provided that all three points that are important to us are fulfilled."

The Israeli minister urged Damascus to observe the 1974 armistice, not allow Iran to use the Syrian territory as a front against Israel and not become a transit point for alleged arms deliveries to Lebanon’s Hezbollah resistance movement.

"We are not looking for friction, but we will know how to respond to any provocation and any challenge," Lieberman said.

Shortly after the remarks, the Israeli military said it had carried out an airstrike on Syria's Golan Heights, killing seven people.

It further claimed that the victims were Daesh elements who sought to attack an Israeli target.

Israeli army spokesman, Ronen Manelis, said the victims had come as close to 200 meters to the border with the occupied lands.

Additionally on Thursday, Russia said it had deployed its military police to the Golan Heights.

A senior Russian Defense Ministry official told a news briefing in Moscow that the military police had begun patrolling Golan and planned to set up eight observation posts in support of UN peacekeeping efforts.

He, however, noted that the Russian presence in Golan was temporary and that the observation posts would be handed over to Syrian government forces once the situation stabilized.

In another development on Thursday, an Israeli official, speaking on condition of anonymity, said Prime Minister Benjamin Netanyahu had cancelled a planned trip to Colombia due to the situation around the Gaza Strip.

According to Press TV, Netanyahu was due to travel to the Latin American country on August 6-9.

Tensions have been running high near the Gaza fence since March 30, which marked the start of a series of protests, dubbed “The Great March of Return,” demanding the right to return for those driven out of their homeland.

The Gaza clashes reached their peak on May 14, on the eve of the 70th anniversary of Nakba Day (the Day of Catastrophe), which coincided this year with the US embassy relocation from Tel Aviv to the occupied Jerusalem al-Quds.

Tags: Syria Israel
Short Link rasanews.ir/201qBb
Share
0
Please type in your comments in English.
The comments that contain insults or libel to individuals, ethnicities, or contradictions with the laws of the country and religious teachings will not be disclosed