Rasa - Tommy Robinson, known as the top Islamphobic and anti-refugee activist in entire Britain, has been released from jail amid calls for his freedom in alt-right camp in the United States and the far-right figures in other countries. 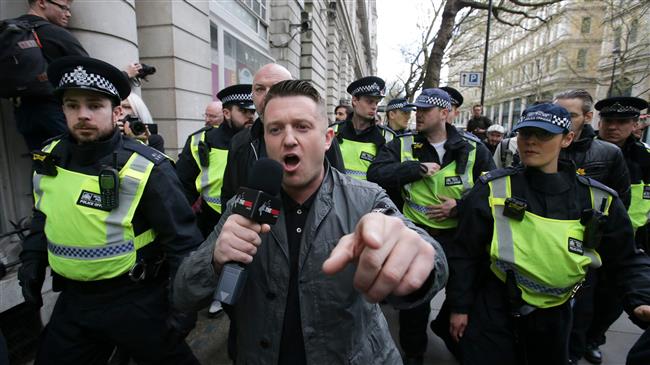 RNA - UK media reported that Robinson, the founder of the English Defence League (EDL), will be released from Onley prison near Rugby where he was serving a 13-month jail sentence for contempt of the court charges.

He would be free on bail and should face a retrial for contempt charges related to his broadcasting outside a court in Leeds in May where a trial was held with blanket reporting restrictions. His filming of the people involved in a criminal trial was watched 250,000 times within hours on Facebook.

He admitted breaching the restriction but appealed against his conviction which sent his behind bars for 10 months.

However, lord chief justice, Lord Burnett of Maldon, ruled in the court of appeal on Wednesday that Robinson will be released on bail on condition that he attended a retrial over the Leeds charges. The judge described the finding of contempt charge about Robinson as flawed, saying the previous court should have waited to hear the case on a “fully informed basis”.

Robinson’s release comes amid increased anger about his role in fueling anti-Muslim and anti-refugee sentiments in Britain. He is known for staging rallies against the spread of Islam in London in 2013 and has been described as a violent far-right racist.

There were reports that people close to US President Donald Trump, including former advisor Steve Bannon, were doing their utmost to have him released.

Bannon, former White House chief strategist, defended Robinson in n an interview to London’s LBC radio last month while saying off-mic that he was “the backbone” of Britain.

Sam Brownback, Trump’s envoy for international religious freedom,also discussed Robinson’s case at a June lunch with British ambassador Kim Darroch while Donald Trump Jr, the US president’s son, commented about the prisoner in one of his tweets.

According to Press TV, Robinson, whose EDL is known as a British fascist group that promotes Islamophobia, has a string of convictions on charges including assault, fraud and drugs possession. He has been convicted several times in the US on charges of using someone else’s passport and drug possession.

Trump supporters have even paid for Robinson’s defense and protests with US-based Middle East Forum, a right-wing think-tank which has famous British fellows on board, spending tens of thousands of dollars to foot his legal bills, among other activities.

The institute even paid for a trip by US Republican Congressman Paul Gosar to London which coincided with Trump’s presence in the city for an official visit last month. Gosar’s defense of Robinson during a speech in London was met with criticism at the time.

Imraan Siddiqi, executive director of the Arizona branch of the Council on American-Islamic Relations, said in a statement that Gosar’s speech was an unprecedented move by a US politician to support hate and bigotry.

“It is inexplicable for a sitting US congressman to speak at, let alone attend a rally for someone responsible for spreading as much hate and bigotry as Tommy Robinson,” said Siddiqi.

Tags: Islamophobic UK
Short Link rasanews.ir/201qBZ
Share
0
Please type in your comments in English.
The comments that contain insults or libel to individuals, ethnicities, or contradictions with the laws of the country and religious teachings will not be disclosed