Rasa - The United Kingdom has in one way or the other supported the actions and policies of the regime in Saudi Arabia only to advance an imperialist agenda, a British political analyst and academic in London has said. 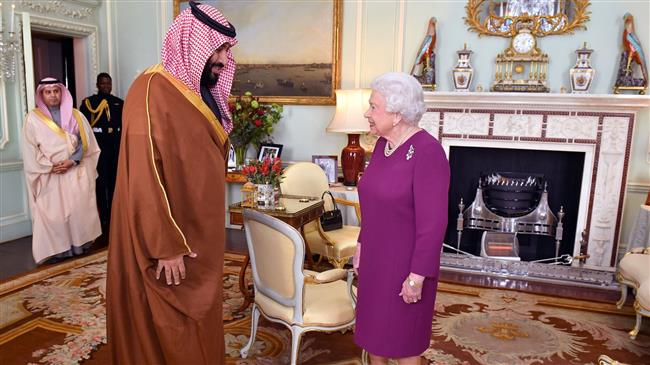 RNA - “It is a shocking thing that the government of the UK which is supposedly democratic supports, arms (and) in every way approves of the actions of perhaps the most autocratic and vicious regime in the world, that is Saudi Arabia,” Rodney Shakespeare said.

The analyst described those dominating the regime in Riyadh as “a bunch of scumbags” who support terrorism and Takfirism in other places.

Shakespeare said Saudi Arabia was also acting in cahoots with the Israeli regime and tolerated the expansion of Israel into the lands of others, a policy, he said, was dictated by the Zionist-controlled government in the United States and the Zionists in the occupied territories.

He questioned Britain’s support for Saudi Arabia, including its military assistance and arms sale, saying only a few people were benefiting from such a massive support to the kingdom.

Shakespeare said that "only a few people actually gain from these arms sales and we would gain in the UK much more if there was a proper wealth distribution in Saudi Arabia and it was democratic and we were trading with them in a normal way."

He said supporting regimes like Saudi Arabia was an old practice of the imperialist Britain, adding that may be a government could gain power in the country that could change that order.

“The real problem is that there is a British imperial mind which likes to deal with elites in autocratic countries and to use them to suppress the local population and that is the way the Roman Empire worked and now the British Empire worked but it is out of date,” said Shakespeare, adding that "we are supporting scum and I hope we get a change of government which would do something about it.”

Rights groups and activists have criticized a major British consulting and accountancy firm over its bidding for a massive military contract in Saudi Arabia, saying the company will become complicit in crimes committed by Saudi Arabia in the war on Yemen.

The PricewaterhouseCoopers (PwC) said Tuesday that it was finalizing a deal with Saudi Arabia’s military to modernize the kingdom’s army, according to an exclusive report by The Guardian.

The deal will in its first stage cover issues like recruitment, resourcing, performance management and strategic workforce planning, and how to manage and communicate change.

The company, however, failed to say what assurances it will put in place to avoid an involvement in a devastating Saudi war on Yemen, which has already killed 15,000 people, most of them civilians.

The United Nations estimates that some 22 million people in Yemen, about 80 percent of the population in the impoverished country, are now in need of humanitarian aid as a result of three years of illegal Saudi-led war.

Many have criticized Western countries, especially the UK, for their military support to Saudi Arabia, saying the kingdom is using weapons purchased from those countries against defenseless civilians in Yemen.

Tags: UK Saudi
Short Link rasanews.ir/201qBX
Share
0
Please type in your comments in English.
The comments that contain insults or libel to individuals, ethnicities, or contradictions with the laws of the country and religious teachings will not be disclosed