Over 150 Daesh terrorists surrender in Afghanistan

Over 150 Daesh Takfiri terrorists have surrendered to Afghan security forces in the northern province of Jawzjan after they were defeated by Taliban. 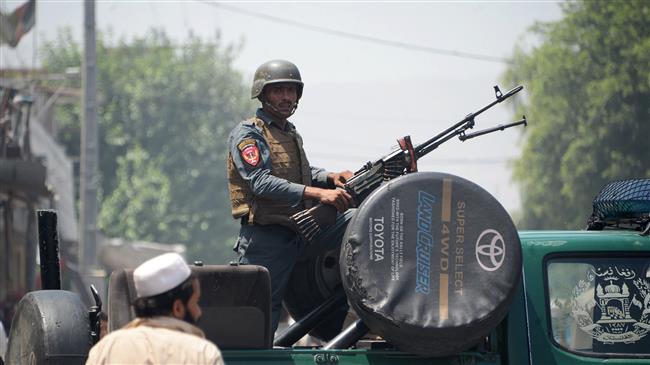 RNA - Local Afghan officials said 152 terrorists from the Daesh strongholds of Darzab and Qush Tepa surrendered in the early hours of Wednesday.

"Their fighters have surrendered in the past, but this time it is more important because the Daesh leader and deputy surrendered with more than 150 fighters all at once," said Mohammad Hanif Rezaee, an army spokesman. "With this the Daesh chapter is going to be closed in the north."

General Faqir Mohammad Jawzjani, the provincial police chief, said Habib-ul Rahman, a senior Daesh leader, was among those who surrendered.

The Taliban militant group took credit for the surrender announced by Afghan officials, saying it had "cleared" the north of Daesh terrorists.

Taliban spokesman Zabihullah Mujahid said more than 150 Daesh terrorists had been killed and more than 130 captured by Taliban with the rest surrendering to government forces rather than Taliban. "The evil phenomenon of Daesh has completely been eliminated and people have been freed from its tortures in Jawzjan province of Afghanistan."

Taliban launched an offensive several weeks ago in Jawzjan against Daesh.

In a separate development, the UN mission to Afghanistan said an employee of the International Organization for Migration (IOM) was among the people who were killed in a coordinated attack on a refugee and repatriation center in the eastern city of Jalalabad on Tuesday.

The UN said in a statement that the employee who died was a 22-year-old woman whose husband had died in a bombing in Kabul three years earlier. It said she leaves behind a six-year-old daughter who is “now an orphan.”

No one immediately claimed responsibility for Tuesday’s attack.

Since late last year, Daesh, which has already lost all its urban strongholds in Syria and Iraq, has taken advantage of the chaos in Afghanistan and established a foothold in the Asian country’s eastern and northern regions, launching brutal attacks against civilians and security forces alike.

According to Afghan intelligence documents, Daesh is present in nine provinces, from Nangarhar and Kunar in the east to Jawzjan, Faryab, and Badakhshan in the north, and Ghor in the central west.

Tags: Taliban DAESH Afghan
Short Link rasanews.ir/201qBS
Share
0
Please type in your comments in English.
The comments that contain insults or libel to individuals, ethnicities, or contradictions with the laws of the country and religious teachings will not be disclosed