Rasa - In breach of International Law and International Humanitarian law, Israeli warships this week intercepted a Norwegian-flagged activist boat trying to break its more than decade-long blockade of the Gaza Strip. 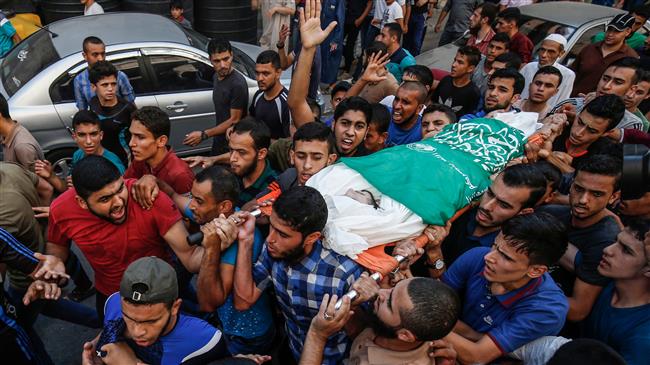 RNA - The Freedom Flotilla Coalition ship is named Al Awda (The Return) to underline the importance of this long-standing demand of Palestinians for the right to return to the lands they have been expelled from.

Israel has imposed a blockade on Gaza since 2007. It says the blockade is in place in order to prevent weapons from entering the Gaza Strip. Activists point to worsening humanitarian conditions in Gaza and say the blockade amounts to collective punishment of the two million Palestinians living there.

The international Freedom Flotilla Coalition is a grassroots people-to-people solidarity movement composed of campaigns and initiatives from all over the world working together to end the siege of Gaza. However, Israel must face a possible International Criminal Court war crimes probe over its illegal blockade of Gaza:

A- The Fourth Geneva Convention obliges a belligerent occupier to provide for and ensure the welfare of the occupied population. Indeed, “Protection of Civilian Persons in Time of War” is the convention’s raison d’etre. Israel, however, has subjected Gaza’s civilian population to a protracted siege that amounts to illegal “collective punishment,” according to the International Committee of the Red Cross, and that has rendered Gaza physically “unlivable,” according to the UN.

B- The Fourth Geneva Convention does not sustain Israel’s right to preserve order in Gaza even as it flagrantly breaches its complementary obligation to guard the welfare of Gaza’s civilian population. In fact, the disorder Israel claims the right to suppress directly springs from the criminal blockade it has imposed.

D- Israel’s occupation of Gaza is illegal, and it has consequently forfeited its rights as a belligerent occupier. Israel’s refusal over a full half-century to conduct good-faith negotiations on the basis of International Law to withdraw from the West Bank, including East Jerusalem Al-Quds and Gaza, has likewise delegitimized its occupation.

E- Lastly, it is a fundamental principle of International Law that no regime may resort to forceful measures unless “peaceful means” have been exhausted. The impetus behind the protests at Gaza’s perimeter fence is Israel’s illegal siege, and their objective is to end it. Even Israeli Prime Minister Benjamin Netanyahu conceded: “They’re suffocating economically, and therefore, they decided to crash into the fence.”

By attacking the Freedom Flotilla Coalition, Israel once again proved to the world community that it wants to protect its occupying regime at all costs, even resorting to either lethal or nonlethal coercion against international aid groups. It’s all the reason why the time is ripe for the world community to react in kind, forcing the usurper regime to lift the illegal siege and allow Palestinians to return to their homes.

Israel’s rejection of this preliminary peaceful step puts it in double breach of International Law: the imposition of an illegal blockade and the unlawful resort to armed force when peaceful means have not been exhausted.

Tags: Palestinian Israel
Short Link rasanews.ir/201qBO
Share
0
Please type in your comments in English.
The comments that contain insults or libel to individuals, ethnicities, or contradictions with the laws of the country and religious teachings will not be disclosed