Rasa - Advisor to the Iranian Parliament Speaker Hossein Amir Abdollahian warned that the economic war spearheaded by the US against Iran is aimed at undermining the country's positive role and influence in the region. 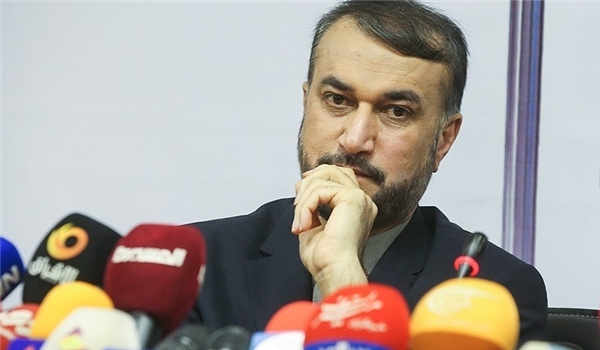 RNA - "The US hostile acts and economic war against Iran prove the Islamic Republic of Iran's power," Amir Abdollahian said in a meeting with Iraqi Ambassador to Tehran Rajih Sabir Aboudi al-Mousavi on Wednesday.

"The enemies of the region have targeted Iran's constructive role and positive influence in the region," he added.

Al-Mousavi, for his part, described Iran as a big and powerful country at the regional and international levels, and said, "The Iraqi government will not allow any country to interfere in the friendly and brotherly interactions between the two Muslim Iranian and Iraqi nations."

In relevant remarks in June, Iranian Parliament Speaker Ali Larijani described Tehran and Baghdad as two strategic partners, and said that the two countries should broaden their mutual cooperation in different fields.

According to Fars News Agancy, the Iranian parliament speaker called on the senior Iraqi officials to try to broaden cooperation with Iran from different angles.

"I hope that a strong government will be formed in Iraq to bring about developments in the neighboring country," Larijani said.

Fayyaz, for his part, presented a report on the latest political and security developments in Iraq, and appreciated support by the Iranian government and nation for Iraq.

"Our approach is towards suitable cooperation and of course reconstruction of Iraq's infrastructures," Fayyaz said.

Tags: Hossein Amir Abdollahian Iran Iraq
Short Link rasanews.ir/201qBB
Share
0
Please type in your comments in English.
The comments that contain insults or libel to individuals, ethnicities, or contradictions with the laws of the country and religious teachings will not be disclosed