Rasa - The Damascus Army restored security all across the region that borders the Israeli-occupied Golan Heights after driving the ISIL back from several regions in Hawz Yarmouk in Southwestern Dara'a over the past 24 hours. 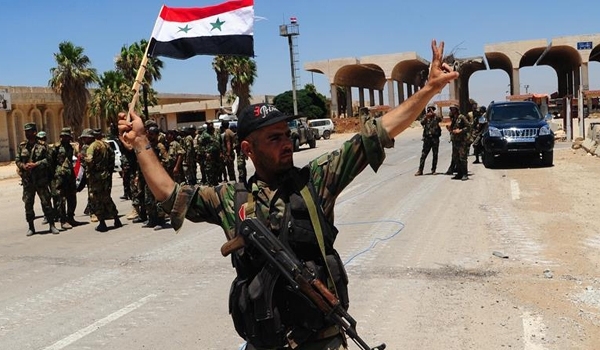 Only the three villages of Beit Areh, al-Qusayr and Kouya are still under the control of the ISIL terrorists who are trapped in the army's circle of forces.

The Syrian Army forces restored security all across the region that borders the Israeli-occupied Golan Heights after driving the ISIL back from several regions in Hawz Yarmouk in Southwestern Dara'a on Tuesday.

Only the three villages of Beit Areh, al-Qusayr and Kouya are still under the control of the ISIL terrorists who are trapped in the army's circle of forces.

Dara'a province will be declared fully free once the army captures the three ISIL-held villages, a field source said, adding that over 270 terrorists have been killed and hundreds of others wounded in the army operation in Hawz Yarmouk in the last 12 days.

Syrian government troops found a large volume of arms and ammunition, including Israeli weapons, as they were conducting a cleansing operation in Southern Damascus on Tuesday.

Three more senior commanders of Tahrir al-Sham Hay'at (the Levant Liberation Board or the Al-Nusra Front) were killed in attacks by unknown raiders in Idlib and Lattakia provinces on Tuesday.

Abu Homam al-Lazeqani, one of the commanders of Tahrir al-Sham, was gunned down by unidentified assailants in the village of Balyoun in Northern Lattakia.

In the meantime, Abu Bakr al-Mesri, another commander of Tahrir al-Sham, was killed along a road connecting Idlib to Saraqib.

Also, Abu Islam Uzbeki, a commander of military training in Tahrir al-Sham, was killed after unknown attackers opened fire at him along a road that connects Darkoush to al-Yaqoubiyeh in Western Idlib.

Hundreds of terrorists are preparing to leave their last bases in Quneitra and pull out from the Southwestern province after surrendering their weapons to the Syrian Army.

A large volume of arms and ammunitions, including three tanks, two cannons and five anti aircraft machineguns have already been handed over to the Syrian Army under the surrender plan.

Meantime, logistic bedrocks have been paved for evacuation of hundreds of terrorists along with their family members from the town of Jabata al-Khashab and several nearby villages via Ofaniyeh corridor in Northern Quneitra.

According to Fars News Agancy, the army is now preparing to declare its full reign over the entire Quneitra province as soon as these last groups of terrorists retreat.

In the meantime, almost 16,000 residents of the villages in Eastern Dara'a that had left their region returned to their villages after the army restored security to the province.

The Syrian Army opened heavy fire at a long convoy of ISIL's vehicles in the Southern province of Sweida, destroying the entire vehicles and killing the terrorists on board on Tuesday.

The artillery units launched a heavy shelling on ISIL's movements along a road connecting Tarba and al-Kaseen regions, destroying a long convoy of the terrorists' vehicles and killing the entire militants accompanying the convoy.

Other artillery and missile units pounded ISIL's positions in the villages of al-Qizeh, Um Ravaq, Tal Olya and al-Dayatha in Northeastern Sweida, destroying the terrorists' gathering centers and strongholds.

In the meantime, the army aircraft launched several bombing raids on ISIL's positions and movements in Arz al-Kara'a in Sweida's Eastern Badiyeh (desert).

Tags: Syria Israel Israel Israel ISIL Golan
Short Link rasanews.ir/201qB7
Share
0
Please type in your comments in English.
The comments that contain insults or libel to individuals, ethnicities, or contradictions with the laws of the country and religious teachings will not be disclosed