US loses in Syria, high time to go?

Rasa – In an exclusive report for Rasa News Agency, Firas Samuri, a freelance journalist, said that the devastating seven-year Syrian civil war is moving swiftly to a logical conclusion. 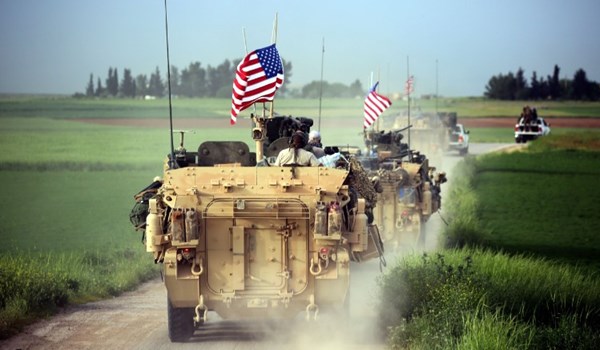 RNA – The devastating seven-year Syrian civil war is moving swiftly to a logical conclusion, and it’s hard not to agree with this statement. This is evidenced by the rapid advance of the Syrian Arab Army (SAA) and the allied forces in the southwestern part of the country when within a month and a half the government forces managed to liberate 4,000 square kilometres of the territories as well as more than 70 towns and settlements. Due to the humanitarian aid from Russia, Syria gradually returns to peace. For the past two months, more than 7,000 Syrian refugees have already returned to their homes.

It’s worth noting that the liberation of the south-western province has been a strategic matter for President al-Asad as it was the birthplace of the sedition that began on March 6 2011. The city had been run by both the Syrian opposition and HTS militants.

The military successes of the Syrian troops play into al-Asad’s, whose defeat in 2015 seems to be a matter of time. At that time the SAA suffered heavy losses in all sectors of the front, and Daesh terrorists controlled more than 70% of the Syrian territories, including major cities and key oil and gas fields.

The involvement of Damascus allies represented by Iran and Russia in fighting terrorism, diplomatic and political gains both at Astana and Sochi platforms as well as increasing confidence among the local population allowed the Syrian leader to reverse the course of events and tip the balance towards peace.

Apart from the Russian Air Force, Iranian military advisers, and Hezbollah units yet another state takes part in the Syrian conflict. Its involvement was merely destructive. This is about the United States.

Since the beginning of the Syrian crisis, the then US President Barack Obama supported the opposition and supplied it with arms and weapons. Then in 2014, under the pretext of combating Daesh, the international coalition was created. Its fighter jets in 15,000 indiscriminate air strikes killed at least 6,000 civilians.

The so-called liberation of the Raqqa city could be clarified as another key milestone of the US interference. While carrying out numerous airstrikes, the US leadership doesn’t reckon with casualties among civilians. According to various human rights organizations, from 1,400 to 2,000 Syrians were killed during the operation of ‘liberators’. Currently, 90% of the urban infrastructure is destroyed and lies in ruins where hundreds of civilians were buried alive. The locals still suffer from the lack of water and electricity supplies, and explosive devices left by Daesh continue to claim the lives of children.

It’s worth noting that in 2017 the US and some Western states unanimously announced to allocate funds for the restoration of the urban infrastructure of the city. However, in March 2018, the Trump Administration betrayed the Syrians, freezing payment of $200 million to stabilize the regions that had previously been controlled by Daesh.

There are also other facts of the US intervention in the course of the Syrian crisis that has repeatedly been reported by mainstream media. It is militants training, the evacuation of Daesh high-ranking field commanders from Syria’s Dayr al-Zawr, the illegal establishment of a 55-kilometre zone in al-Tanf and many other things.

Indeed, the US failed to reach its goals of separating Syria for quasi-sates and overthrowing al-Asad.

However the position of the past and current head of the White House on Syria varies considerably. Trump, unlike Obama, is explicit about leaving Syria to Moscow after destroying the Islamic State. Most likely, he looked at the 2003 invasion of Iraq and decried how it destabilized the region, empowered Iran, damaged relations with Washington’s allies, and fueled extremist violence, undermining the US position in the area.

Finally, following all the brutalities committed by the US the only one way for it to remain in Syria is to contact the official government on the return of refugees and displaced persons.

Tags: syrian army Syrian Syrian rebels Syria Syria rebel forces syrian crisis Syria developments
Short Link rasanews.ir/201qAm
Share
0
Please type in your comments in English.
The comments that contain insults or libel to individuals, ethnicities, or contradictions with the laws of the country and religious teachings will not be disclosed