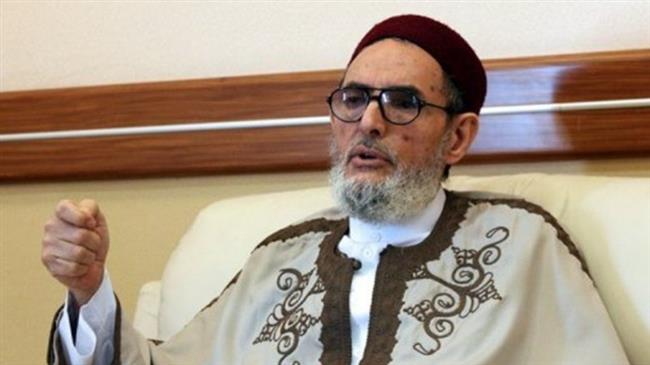 RNA - The top cleric condemned the killings committed in the eastern city of Derna under the pretext of fighting terrorism, saying the claim is “a blatant lie”, al-Ebaa TV satellite TV channel reported on Friday.

He said in an interview with al-Tanasuh TV channel, which is affiliated to the religious organization in Libya, on Wednesday that the hostility to Libya and the Arab uprisings were all driven by the “Zionists’ Room” in the UAE.

Ghariani's remarks came after a video went viral on social media, showing forces of the UAE-backed Libyan military strongman Khalifa Haftar killing two unarmed people in Derna. A scream of one of the victims was heard shortly before being shot dead. The video also showed Haftar’s forces physically assaulting the other man after they ordered him to take off his shoes and clothes. They later shot him.

Other footage showed Haftar’s forces mutilating the body of Abu Zayd al-Shalawi, one of the fighters of the Derna Protection Force (DPF), who had been killed during clashes with Haftar’s forces in the eastern city.

The areas that have been captured by Haftar’s forces in Derna have reportedly witnessed retaliatory acts, including arresting imams of Friday prayers and holding them in a notorious prison.

According to Press TV, Derna is the only major city in eastern Libyan that has remained alien to Haftar’s Libyan National Army (LNA). It has been under LNA siege for almost two years and the DPF has been mostly in control.

To gain more support for its massive ground offensive, the LNA has labeled the DPF as a group linked to al-Qaeda, saying the Derna operation is aimed at purging the city of terrorists. The DPF, however, has brushed aside those claims and says it is resisting Haftar’s push to dominate the entire Libya through military assistance from certain countries.

According to Press TV, Haftar, a general under former dictator Muammar Gaddafi, has been mostly opposed to efforts by the United Nations to establish a unity government in Libya. He has openly opposed the rule of one such administration in the capital Tripoli since it was established in 2015 and continues to remain close to the rival government and parliament in the east of Libya.

Haftar and the LNA have been backed by certain Arab governments, including the United Arab Emirates and Libya’s neighbor Egypt, while governments in Europe that once contributed to a NATO military operation to oust Gaddafi have also offered Haftar some diplomatic support.

Tags: UAE Libya
Short Link rasanews.ir/201q0w
Share
0
Please type in your comments in English.
The comments that contain insults or libel to individuals, ethnicities, or contradictions with the laws of the country and religious teachings will not be disclosed

Any violation of Syrian airspace will be dealt as foreign aggression