Rasa - Deputy Foreign and Expatriates Minister Fayssal Mikdad said on Sunday that Syria supports and calls for the formation of an international commission of inquiry into the massacres committed by the US-led international coalition in Raqqa and other Syrian cities, adding that Syria urges UN Secretary-General to support this proposal and help deliver humanitarian aid to Raqqa. 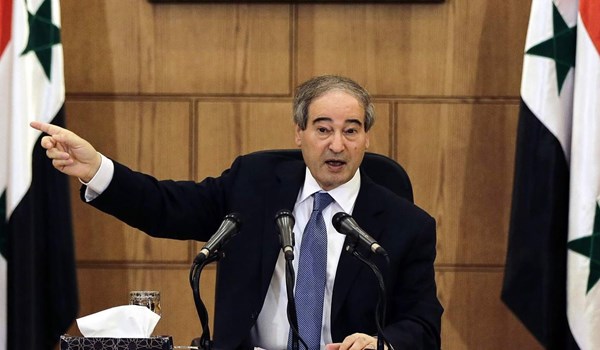 RNA - “We are not intimidated by threats, Syria is steadfast and achieves victories over terrorism; those who threaten Syria give assurances to terrorist organizations in order to continue killing civilians,” Mikdad said at a press conference at the Foreign Ministry headquarters in Damascus, SANA reported.

Those who shed crocodile tears over the Syrian civilians have never said a word about the crimes perpetrated by the US-led international coalition in Raqqa and complete destruction of the city, Mikdad added, wondering if the US and its allies have ever delivered a piece of bread to the city, treated the injured people or dismantled mines.

He noted that the US crimes in Syria are crimes against humanity that have been committed in front of the very eyes of the UN Security Council and other international organizations which dare not say a single word.

Mikdad stressed that Syria has cooperated and will cooperate to implement the latest UNSC Resolution No. 2401 on the cessation of combat activities in Syria, indicating that the armed terrorist groups continue to breach the resolution and shell Damascus on a daily basis.

Deputy Foreign Minister affirmed that the Syrian army and its allies’ military operations will continue till terrorists are fully eliminated, pointing out that the Syrian people are the ones who really suffer from preventing the delivery of humanitarian assistance to the Eastern Ghouta area.

He stressed that the armed terrorist groups and the US, Britain and France which support them hold the responsibility for all what is happening.

On accusing Syria of using chemical weapons, Mikdad reaffirmed that Syria does not possess chemical weapons and the fabricated news circulated by Western parties aim at frightening the Syrians or launching attacks such as the US attack on al-Shayrat Airport.

He hailed the Syrian Arab army’s sacrifices and achievements in order to defend their people and homeland.

Tags: US Syria Raqqa
Short Link rasanews.ir/201pbe
Share
0
Please type in your comments in English.
The comments that contain insults or libel to individuals, ethnicities, or contradictions with the laws of the country and religious teachings will not be disclosed