Rasa - A US political action committee (PAC) has put up a billboard in Pensacola, Florida referring to the powerful pro-gun lobby group, the National Rifle Association (NRA), as a “terrorist organization” amid a new gun-control campaign in the state and across the country. 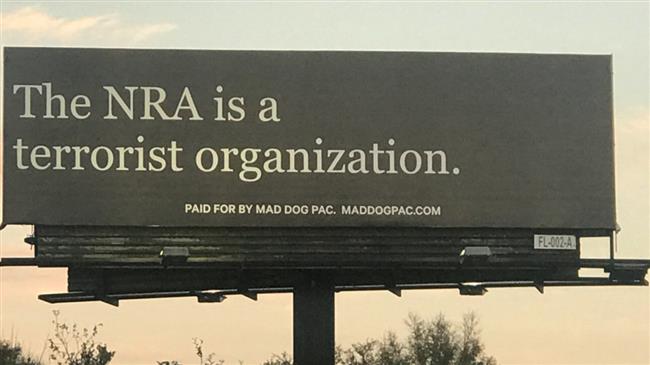 RNA - The erection of the billboard on Saturday was arranged by Mad Dog PAC, which funds billboards throughout the US censuring NRA-backed Republican candidates as well as US President Donald Trump.

The development came as the NRA has become the focus of a growing movement by activists demanding enactment of tougher gun control laws in wake of the latest mass shooting at a US public school that killed 17 and injured 14 people in Parkland, Florida on February 14.

A 19-year-old white supremacist and former student carried out the shooting and later arrested by police officers.

This is while the survivors of the shooting and their families have repeatedly called out Florida’s Republican Senator Marco Rubio for taking millions in campaign donations from the NRA.

According to Press TV, days after the school massacre, a student survivor blasted Trump and many US lawmakers for receiving money from the NRA, which fervently opposes gun control across the nation.

“If the president wants to come up to me and tell me to my face that it was a terrible tragedy and how it should never have happened, and maintain telling us how nothing is going to be done about it, I’m going to happily ask him how much money he received from the National Rifle Association,” said student Emma Gonzalez of Marjory Stohneman Douglas High School during her speech at a major gun control rally in Ft. Lauderdale on February 18.

“Is that how much these people are worth to you, Trump?” she then asked as thousands of protesters at the rally started changing “shame on you” after she mentioned the NRA’s donations to Trump.

Gonzalez further told the crowd that US politicians should stop accepting political donations from the NRA.

Tags: NRA US
Short Link rasanews.ir/201pbS
Share
0
Please type in your comments in English.
The comments that contain insults or libel to individuals, ethnicities, or contradictions with the laws of the country and religious teachings will not be disclosed