Rasa - Bahraini police have arrested 116 people over allegations of links to terrorism as the ruling Al Khalifah regime presses ahead with its heavy-handed clampdown on political dissidents. 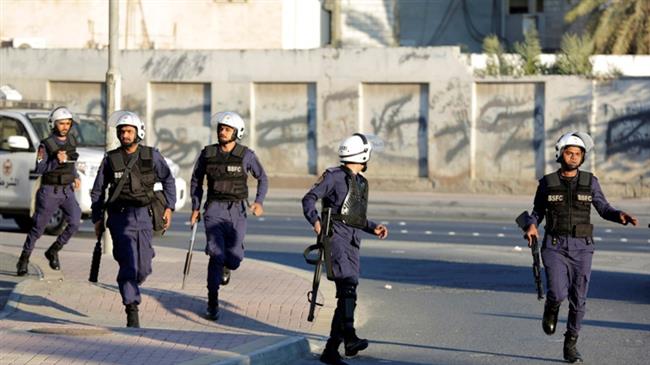 RNA - An official statement on Bahrain’s state news agency BNA said on Saturday that regime forces had detained 116 members of a “terror" cell and thwarted a number of attacks across the country and seized large quantities of arms and explosives.

The statement claimed that the suspects had links with Iran's Islamic Revolution Guards Corps (IRGC). Iran denies supporting any bid to overthrow the Bahraini government.

Iran’s Foreign Ministry was quick to respond, dismissing the accusation as “fabricated and baseless” and called on the Bahraini rulers to stop the “awkward and delusional blame game” against Iranian institutions.

Meanwhile, on Saturday Bahrainis took to the streets in several regions of the Persian Gulf kingdom to vent their anger at the Al Khalifah regime’s crackdown on political dissidents.

Protesters held placards and chanted slogans against the Al Khalifah regime and called for immediate release of political prisoners.

The protesters also expressed solidarity with prominent Shia cleric Sheikh Isa Qassim, who has been living under virtual siege since Manama revoked his citizenship in June 2016.

A key ally of Washington and home to the US Fifth Fleet, the Manama regime has drawn harsh criticism from international rights groups over its crackdown on dissent.

Dozens of Bahraini people have been jailed and stripped of citizenship since a popular uprising began in the tiny Persian Gulf state in mid-February 2011. The kingdom has also deported citizens whose nationalities had been revoked.

On March 5, 2017, Bahrain’s parliament and king approved the trial of civilians at military tribunals in a measure blasted by human rights campaigners as being tantamount to imposition of an undeclared martial law countrywide.

Tags: Terror bahrain
Short Link rasanews.ir/201pbK
Share
0
Please type in your comments in English.
The comments that contain insults or libel to individuals, ethnicities, or contradictions with the laws of the country and religious teachings will not be disclosed