Rasa - Myanmar has defended its military build-up near the border with Bangladesh, where thousands of Rohingya Muslim refugees have sheltered after fleeing a brutal military crackdown on their community. 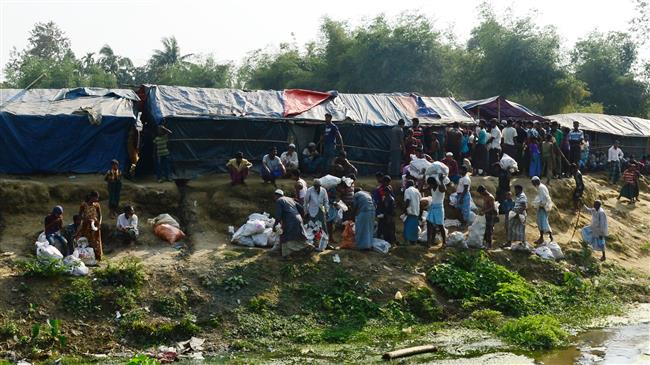 RNA - On Thursday, Myanmar sent some 200 of its armed soldiers and police to a border zone with Bangladesh.

Bangladesh immediately reacted to the move by summoning Myanmar’s envoy and calling for the “pullback of Myanmar security forces along with military assets from the area.”

Myanmar government spokesman Zaw Htay, however, said the military build-up “was not aimed at antagonizing Bangladesh.”

“We acted this way based on the information we got regarding terrorism,” Zaw claimed on Friday.

Nearly 700,000 Rohingya have escaped to neighboring Bangladesh since August last year, when the Myanmarese military intensified its crackdown against the community. About 5,300 people had also been staying in a makeshift camp on the border line.

In recent weeks, Myanmar has increased pressure on them to leave the no man’s land strip across the border.

Myanmarese soldiers, according to Bangladeshi border guards and refugees, used loudspeakers to tell the refugees to leave the area. They also fired one round of gunshot on Thursday evening to scare the refugees living along the border strip.

“It looks like they attempted to push the Rohingya people on the zero line to Bangladesh,” senior Bangladesh border guard official Major Iqbal Ahmed told Reuters.

According to Press TV, Myanmar signed a deal with Bangladesh in January to repatriate the Rohingya people. The process, however, has so far been delayed due to lack of preparations and protests by the refugees, who refuse to return to Myanmar without guarantees of basic safety and citizenship.

Many of those who have fled have recounted harrowing accounts of rape, murder, and arson at the hands of Myanmar’s force. Myanmar refuses to grant citizenship to the Muslim minority community.

Tags: Muslim Rohingya
Short Link rasanews.ir/201pb6
Share
0
Please type in your comments in English.
The comments that contain insults or libel to individuals, ethnicities, or contradictions with the laws of the country and religious teachings will not be disclosed