US, UK instructed terrorists to use chemicals near Syria capital: Military source

Rasa - The US, the UK and other western states have given terrorist groups instructions to stage a chemical attack in the Eastern Ghouta suburb of Damascus and pin it on the government, a Syrian military source says. 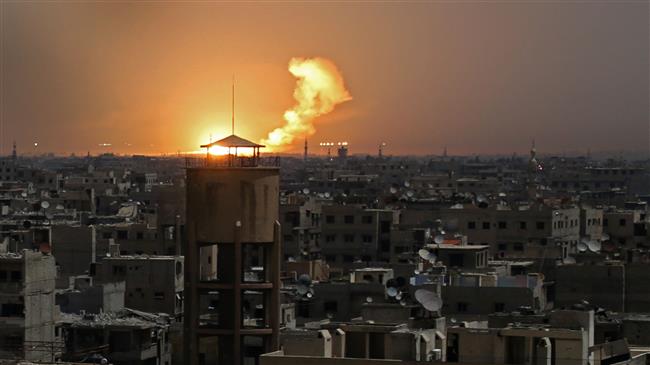 RNA - Citing confidential information, the source said Eastern Ghouta-based terror organizations, including al-Nusra Front, Faylaq al-Rahman and Ahrar al-Sham, are preparing for another “spectacle on the alleged use of chemical weapons by the Syrian Arab Army,” the official SANA news agency reported on Thursday.

Under instructions from the Western countries, including the US and the UK, the terrorists would deploy the chemicals “near the front lines with the Syrian army and target civilians and accuse the Syrian State and army of this act,” the source added.

The sources, however, added that Syrian armed forces have “never had chemical weapons or used them and will not do.”

Syria signed the Chemical Weapons Convention (CWC) in 2013 and surrendered its stockpiles of chemical weapons months later to a joint mission led by the UN and the Organization for the Prohibition of Chemical Weapons (OPCW), which oversaw the destruction of the weaponry.

It has also consistently denied using chemical weapons over the course of the foreign-backed militancy, which gripped the country in 2011.

Western governments and their allies, however, have never stopped pointing the finger at Damascus whenever an apparent chemical attack takes place.

Militants and their foreign supporters have in recent days been making fresh attempts to link an alleged gas attack to the Syrian government.

Last week, Russia, which has been helping Syrian forces in their anti-terror operations, warned that militants were planning a gas attack in Eastern Ghouta to pin it on the Syrian government.

Shortly after that warning, the so-called Syrian Observatory for Human Rights, which is sympathetic to anti-Damascus militants, claimed 14 civilians had suffered breathing difficulties after a Syrian warplane struck the village in the Eastern Ghouta region in the Syrian capital’s suburbs.

Both Damascus and Moscow rejected the claim.

Meanwhile, the US and its allies are pushing for a UN probe of the alleged use of chemical weapons in Syria, according to a draft statement seen by AFP.

Russia and Syria back such a probe, but say the investigators should not be biased in favor of the Western-backed militants operate in an impartial and independent manner.

Britain and France have said they would strike Syria if such claims are proven.

On Friday, French President Emanuel Macron and his US counterpart Donald Trump held a phone call, saying there would be “no impunity” in the event of “further chemical weapons use in Syria,” Reuters reported.

Macron “stressed there will be a firm response in the case of proven use of chemical weapons leading to the death of civilians, in close coordination with our American allies,” a statement from the French presidency said.

Trump had also held a phone conversation with German Chancellor Angela Merkel, during which they called on Russia to stop its bombardments of terrorists in Eastern Ghouta.

Later today, the United Nations Human Rights Council is set to hold an emergency session on Eastern Ghouta at the request of Britain.

Tags: US Syria UK
Short Link rasanews.ir/201pb3
Share
0
Please type in your comments in English.
The comments that contain insults or libel to individuals, ethnicities, or contradictions with the laws of the country and religious teachings will not be disclosed