Pentagon deploys hundreds of US troops in southeastern Syria: Reports

Rasa - The Pentagon has reportedly deployed hundreds of American troopers in southeastern Syria on the border with Iraq as the United States is virtually occupying tens of kilometers there without the consent of the Syrian government. 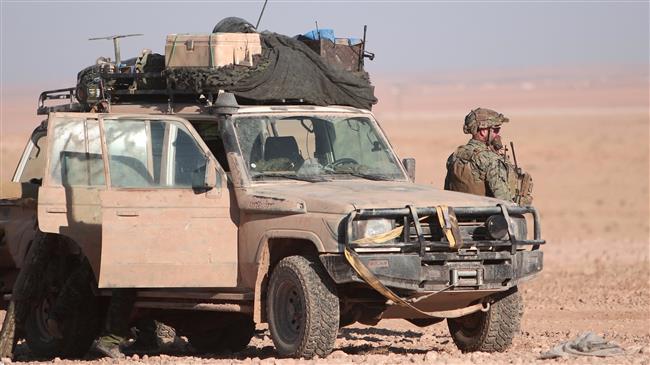 RNA - Turkish-language daily Yeni Akit reported that 600 troops, including special forces soldiers, have arrived at al-Tanf garrison, which was established two years ago.

The Arabic-language Palmyra Monitor news website, which is sympathetic to foreign-sponsored Takfiri militant groups, also wrote that units of US soldiers have reached the base with armored vehicles over the past few days.

The reports come as an official from Russia’s Security Council told Ria Novosti news agency that the United States has set up around 20 military bases in areas controlled by Kurdish militants it supports in northern Syria.

“The return of peace and stability to Syria is hampered by continued external interference in the Syrian crisis. For example, in the territory controlled by the people’s self-defense units of Kurdistan, some 20 US military bases have been created,” Alexander Venediktov said.

According to Press TV, the official also said Washington is supplying the Kurds with the most advanced weapons.

Venediktov further noted that the United States is occupying a 55-kilometer (34-mile) zone surrounding the al-Tanf garrison without the Damascus government’s consent.

“This zone includes the infamous Rukban refugee camp, where militants from illegal armed groups are freely moving near the US Armed Forces,” he pointed out.

Meanwhile, Russia's Ambassador to Jordan, Boris Bolotin, told Sputnik news agency he has information that Takfiri terrorists are being trained in the al-Tanf region.

“I do not rule out that they could be militants who fled Raqqah,” Bolotin said.

Tags: US Syria
Short Link rasanews.ir/201pb1
Share
0
Please type in your comments in English.
The comments that contain insults or libel to individuals, ethnicities, or contradictions with the laws of the country and religious teachings will not be disclosed