Bangladesh to protest to Myanmar over troops gathering at border

Rasa - Bangladesh will send a protest note to Myanmar over an increased security presence near a portion of their border where thousands of Rohingya Muslims have been sheltering just inside Myanmar, a Bangladesh border guard official said on Thursday. 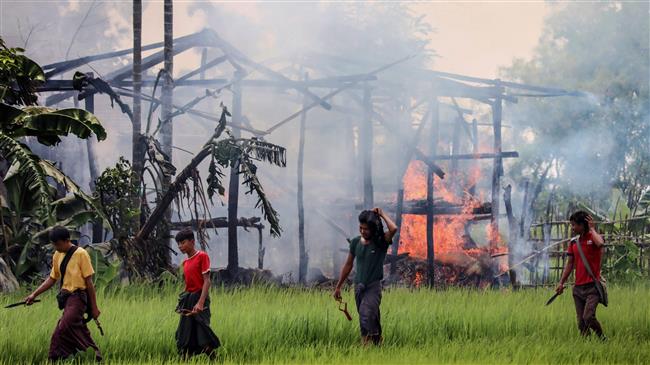 RNA - The United Nations refugee agency has expressed concern that thousands of people staying on the strip of land, dubbed "no man’s land" because it is beyond Myanmar’s border fence but on Myanmar’s side of a creek that marks the international border, would be forcibly returned without sufficient consideration for their safety.

Nearly 700,000 Rohingya fled Myanmar for Bangladesh after insurgent attacks on Aug. 25 sparked a military crackdown that the United Nations has said amounted to ethnic cleansing, with reports of arson attacks, murder and rape.

About 5,300 people had been staying in a makeshift camp on the border line since late August, but roughly half moved to camps inside Bangladesh after the two countries met to discuss possible repatriation on Feb. 20.

Several hundred of them have been moved back to the border line, two border guards said.

On Thursday, Myanmar armed soldiers and police, estimated to number more than 200, came to the border fence and appeared to be moving heavy weapons including mortars to the area, said a Bangladesh army official and the two guards, all three of whom spoke on condition of anonymity.

Dil Mohammed, a community leader among the roughly 950 Rohingya families still staying at the border, told Reuters that Myanmar officials used loudspeakers to tell them to move from the area.

"We are sending them a protest note. We have already asked for a flag meeting," said Rahman, the force's additional director general in charge of operations, referring to a meeting of border guards of both countries.

"They have removed heavy weapons, such as machine guns and mortars, from the area after our verbal protests."

Myanmar military spokesman Myat Min Oo said he could not confirm there was any troop activity, and declined to comment further, citing a public holiday in Myanmar.

A spokesman for the country's home affairs ministry, Myo Thu Soe, said he was unaware of the troop movements.

On Wednesday, he had told Reuters that "terrorists" with links to the Arakan Rohingya Salvation Army, which had attacked 30 Myanmar police posts and an army base in August, were sheltering in the border area.

Zaw Htay added that he believed people were staying there to put political pressure on Myanmar’s government and "create a situation where Myanmar security forces and government officials will remove them".

Tags: Muslim bangladesh Rohingya Myanmar
Short Link rasanews.ir/201pau
Share
0
Please type in your comments in English.
The comments that contain insults or libel to individuals, ethnicities, or contradictions with the laws of the country and religious teachings will not be disclosed