Rasa - A civilian was killed and 5 others were injured in the terrorist groups' rocket attacks on Dwela’a region in Damascus province, the Syrian state-run news agency reported on Wednesday. 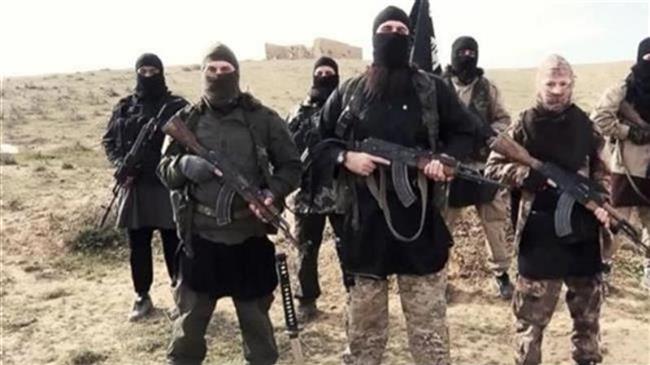 RNA - A civilian was killed and 5 others were injured in the terrorist groups' rocket attacks on Dwela’a region in Damascus province, the Syrian state-run news agency reported on Wednesday.

SANA reported that 12 civilians were injured when terrorists positioned in some areas in Ghouta targeted a number of areas in Damascus countryside.

SANA quoted a source at Interior Ministry as saying that three civilians were injured and material damage was caused due to terrorist rocket attack on al-Wafideen Camp, surroundings of al-Assad residential Suburb in Harasta, and Ibn Sina Hospital.

Also, a source at Damascus Countryside Police Command told SANA that terrorist groups fired three rockets at a region near Daff al-Sakhir and al-Naseem areas in the town of Jaramana, injuring 9 civilians, including a woman who is in critical situation.

Also, Terrorists open fire at population of besieged towns of Kafraya and al-Fou'aa in Idlib province.

Also in the past 24 hours, the terrorist groups in Eastern Ghouta kept shooting at civilians for the second day in a row to prevent their exit from the embattled town during the daily truce hours.

The terrorist groups have deployed snipers near the corridors that have been specified by the Syrian government for the safe pass of civilians out of the town, shooting at anyone who intends to leave Eastern Ghouta for safer regions.

The humanitarian corridor at al-Wafedin camp was set up to be used by civilians during the five-hour-long daily ceasefire.

The Syrian Army declared that it has provided all the necessary logistical backup for the transfer of civilians via the corridor. The terrorists have also been shooting at the Syrian army convoy in charge of transferring civilians who manage to get through the safe pass.

Meantime, local sources reported that the terrorists carried out nine cases of rocket and mortar attacks on Dhahiya al-Assad region in Harasta in Eastern Damascus.

They added that areas near the al-Wafedin camp's humanitarian corridor came under terrorists' mortar attack.

Also on Wednesday, the Syrian Army troops stormed the positions of Al-Nusra Front (Tahrir al-Sham Hay'at or the Levant Liberation Board) and captured more regions and farms after daily ceasefire ended in Eastern Ghouta, a media outlet said.

The Arabic-language Moraseloun news website reported that the army men deployed South of al-Eshara Battalion Base, backed up by the artillery and missile units, stormed the Al-Nusra strongholds and their allied terrorist groups in Eastern Ghouta on Tuesday night and captured Hawsh al-Zawaherah Farms after the daily ceasefire ended.

Also, the Arabic-language Al-Mayadeen TV reported that the army units managed to take control over a key region between Hawsh al-Zawahereh and al-Shifouniyeh square.

In the meantime, field sources reported that terrorists' defense lines in Eastern Ghouta are on the verge of full collapse after the recent advances of the army in al-Shifouniyeh settlement. The army troops waited for the termination of daily truce in Eastern Ghouta and launched their operation at night.

Local sources in Eastern Deir Ezzur reported on Wednesday that the US-led collation warplanes bombed a gathering of displaced people in the province, killing and wounding tens of civilians.

The sources said that the fighter jets carried out another bombing raid on a gathering of displaced civilians in Zahra al-Alouni region in Eastern Deir Ezzur, killing at least 24 and wounding several more.

The number of casualties will possibly rise due to the critical health conditions of some of the injured.

A sum of 14 Turkish Army men and Ankara-backed militants were killed or wounded in fierce clashes with the Kurdish fighters in Afrin region in Northwestern Aleppo, a Kurdish media outlet reported on Wednesday.

Hawar news reported that four Turkish soldiers and allied militants were killed and six more were wounded in heavy fighting with the Kurdish militia in the village of Ali Jara in Bolboleh region within the framework of the Ankara-led Operation Olive Branch.

It went on to say that a military vehicle of the Turkish army was also destroyed by the Kurds in Bolboleh.

Also, four Operation Olive Branch forces were killed or injured in the battle with the Kurdish combatants in the village of Korka in Mabata region.

Also on Wednesday, the Turkish Army forwarded more military hardware to the border with Syria as Ankara prepares to intensify Operation Olive Branch against the Kurds in Northern Syria.

The state-run Anadolu news agency reported that a new convoy of the army vehicles has been sent to Kilis region near the border with Syria to provide more supports for the forces of Operation Olive Branch against the Kurdish fighters in Afrin Region in Northwestern Aleppo.

It went on to say that the army convoy, including 40 vehicles, was sent to the border region with Syria under strict security measures.

Also in the past 24 hours, the Al-Nusra Front has pulled its gunmen from the entire positions in Western Aleppo amid continued clashes with the newly-formed rival terrorist group of Syria's Tahrir Front in Aleppo and Idlib, field sources reported.

Also on Wednesday, the General Staff of Turkish Army reported a sum of 2,184 Kurdish fighters have been killed or held captive in the Turkish Army's military operation in Afrin region in Northwestern Aleppo.

The army announced in a report that a sum of 2,184 Kurdish gunmen have been killed or captured by the Turkish army and Ankara-backed militants within the framework of Operation Olive Branch in Afrin region.

Meanwhile, Kurdish media outlets claimed that four Turkish soldiers and allied militants were killed and six more were wounded in heavy fighting with the Kurdish militia in the village of Ali Jara in Bolboleh region within the framework of the Ankara-led Operation Olive Branch.

The Kurdish-language Hawar news went on to say that a military vehicle of the Turkish army was also destroyed by the Kurds in Bolboleh.

Also, four Operation Olive Branch forces were killed or injured in the battle with the Kurdish combatants in the village of Korka in Mabata region.

A large number of people in Raqqa city poured into the streets to display their strong opposition to the US forces' deployment in the region.

A large number of people in the Northeastern city of Raqqa took to the streets in opposition to the US troops' buildup in their city, accusing the US military forces and their allied militants of destroying their city and also executing large groups of civilians.

The protestors vowed not to cooperate with the US troops, and warned that they will continue to show their disagreement with the US forces' occupation and disintegration of Syria in demonstrations and strikes.

Field sources said on Wednesday that Tahrir al-Sham Hay'at (the Levant Liberation Board or the Al-Nusra Front) has embarked on pulling its gunmen back form more positions in Idlib and Hama provinces after fierce clashes with rival terrorists from Syria's Tahrir Front.

According to Fars News Agancy, the sources further said that Syria's Tahrir Front pushed Tahrir al-Sham Hay'at back from Taftnaz airport and Kafr Lusin passageway in Northern Idlib at the border with Turkey as well as the two villages of Qah and Atmah.

Also on Wednesday, the Syrian Army troops fended off a heavy offensive of the terrorists to cut off the strategic road connecting Hama to Homs province, inflicting major losses on the militants.

The army men warded off terrorists' heavy attack near the village of Khneifes Southwest of the town of al-Salamiyah in Southwestern Hama.

The terrorists failed to break through the army positions to close off the road connecting al-Salamiyah to Homs.

The army men restored sustainable security to the road again.

The terrorists suffered heavy casualties and retreated from the battlefield.

Tags: Ghouta Terrorist Syria
Short Link rasanews.ir/201pat
Share
0
Please type in your comments in English.
The comments that contain insults or libel to individuals, ethnicities, or contradictions with the laws of the country and religious teachings will not be disclosed