Ceasefire in Syria: What Should Come Next? 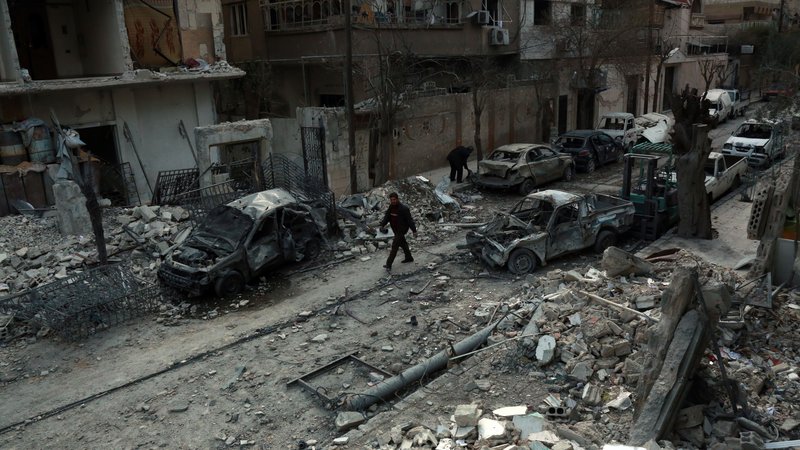 RNA - Upon requests from Iran, Russia and Syria, however, amendments were made to exclude ISIL, Al-Qaeda and Nusra Front along with "individuals, groups, undertakings and entities" associated with the terrorist groups from the ceasefire. It is precisely under these amendments that Chief of Staff of the Iranian Armed Forces Major General Mohammad Baqeri said a day later that both Tehran and Damascus would comply with the month-long Syria ceasefire, but that attacks would continue in some Damascus suburbs held by terrorists.

Maj. Gen Baqeri also said the architects of the ceasefire (a reference to the United States and its allies) had it passed at the UN in order to forestall the Syrian army's eradication of terrorists in the Damascus suburbs. In his words, "This time again, like in the past, those who do not want security and peace in Syria took up the banner of ceasefire in order to support terrorists after they saw the Syrian army and government were cleansing the Damascus suburbs.”

Few points could be said in this respect:

- There is no official statement from the US government on what happens after the month-long ceasefire, because there is no resignation to the idea that the US occupying troops and their Qaeda-allied proxies are going to withdraw from Northern Syria, much less put down their arms and stop attacking the Syrian government and its allies.

- This is potentially a very complicated matter. The presence of the US troops potentially makes it difficult to Damascus and its Iranian-Russian allies to finish off the remnants of terrorist groups in the remaining territories inside the country. Moreover, the presence of US troops makes it difficult for Syria to send troops to resist the Turkish invasion of Kurdish regions, as the US has intentionally tended to kill Syrian pro-government forces, in rather large numbers, whenever they get close to US deployments. Mind you, Syria doesn’t support the US having troops in their country.

- The US is assisting the Kurds to provoke them into independence, while it also continues covert and somehow over aid to Qaeda-allied rebels, and at this dangerous point it’s not at all clear how they can co-exist in the occupied territories in post-ISIL Syria. Worse still, though US commanders have said they are ready to fight if Turkey starts attacking, the US and Turkey have also made a deal to try to avoid a fight over Manbij, one which Turkey hopes will end with US and Turkish troops in the city and the Kurds kicked out.

- As long as this is the case, Syria will see no lasting peace, let alone a permanent ceasefire. The US will continue to hype Syrian government attacks against terror-held areas to justify new UN resolutions while downplaying the effects of its own coalition air strikes against civilian objects, which undermines the legitimacy of human rights advocacy. Nevertheless, Tehran and Damascus will still adhere to the ceasefire resolution – although parts of the suburbs of Damascus, which are held by the terrorists, are not covered by the ceasefire and clean-up operations will continue apace.

As is, under International Law and the UN Charter, the Syrian army has every right to drive out Qaeda-linked Al-Nusra terrorists from Eastern Ghouta which has become a festering ground for foreign-backed terrorist groups launching mortar attacks on Damascus. Lest we forget, the UN resolution also allows the Syrian government to continue similar operations against terrorists in Idlib province, the country’s largest remaining militant stronghold.

Moreover, with or without a lasting ceasefire agreement, all US occupying troops must leave the country at the earliest. The US should stop supporting its separatist Kurds and terror proxies with air cover and military support. It cannot and should never be allowed to use the ongoing ceasefire to reorganize its infamous proxies for fresh attacks against the Syrian government and its allies. Last but not the least, America’s favorite terrorists cannot and should never be allowed to have a say or play any role in the ongoing peace talks organized by Iran, Russia and Turkey.

Anyone genuinely concerned with saving lives should urge the United States to end its regime-change bloodshed in the Arab country and join in UN-backed peace talks, rather than boycotting them. Above all, the United Nations can and should exert pressure on the US to stop its reckless campaign of encouraging the overthrow of authority in post-ISIL Syria. The bitter experience in Iraq and Afghanistan tells us the vacuums will always be filled by warlords, foreign mercenaries, and Wahhabi-Takfiri death cults.

Tags: Syria Ceasefire
Short Link rasanews.ir/201paU
Share
0
Please type in your comments in English.
The comments that contain insults or libel to individuals, ethnicities, or contradictions with the laws of the country and religious teachings will not be disclosed