Rasa - The Church of the Holy Sepulchre in Al-Quds (Jerusalem) remained closed for a third day Tuesday as Christian leaders protested against Israeli occupation tax measures and an oppressive proposed law. 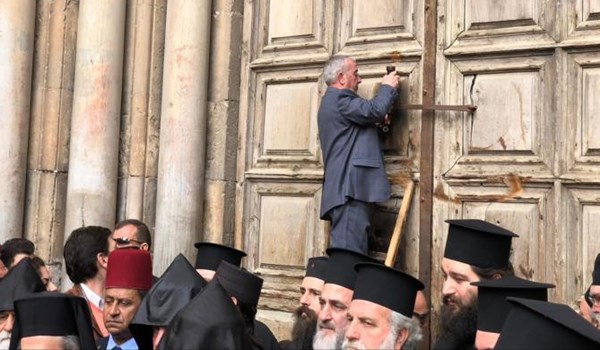 RNA - Christian leaders closed the Church of the Holy Sepulchre on Sunday at noon in a rare move, leaving thousands of pilgrims and tourists seeking to visit what many see as the holiest site in Christianity locked outside, Al-Manar reported.

Church officials said the church will be closed until further notice as they protest Israeli occupation authorities to reverse their measures.

Christian leaders are angry over attempts by Israeli occupation authorities in Al-Quds to enforce tax collection on church property.

They also said legislation being considered by Israel’s government would allow church property to be expropriated.

Tags: Church Quds
Short Link rasanews.ir/201paS
Share
0
Please type in your comments in English.
The comments that contain insults or libel to individuals, ethnicities, or contradictions with the laws of the country and religious teachings will not be disclosed