Rasa - Palestine Liberation Organization (PLO) Executive Committee member Hanan Ashrawi said on Monday the decision by the Israeli Ministerial Committee for Legislation to strip the High Court of jurisdiction over Palestinian cases regarding land and property confiscation and to refer them to the Jerusalem District Court will entrench the military occupation indefinitely. 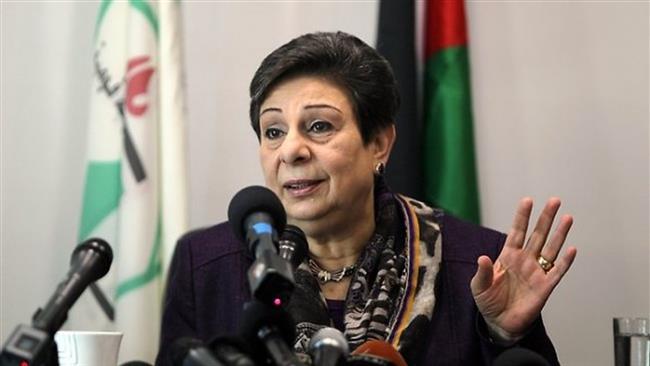 RNA - “With such legislation, Israel is seeking to impose its sovereignty on all of the occupied West Bank, systematically erasing the Palestinian presence and continuity on Palestinian land,” she said in a statement, WAFA reported.

“By applying Israeli law to the illegal settlements in the West Bank, the settlers will be emboldened to embark on a land grab, and the Palestinians will be prevented from seeking recourse and any kind of justice to protect their land and properties,” Ashrawi stated.

The PLO official added “It is not surprising that the proposal was introduced by Justice Minister Ayelet Shaked who has openly advocated for the genocide of the Palestinian people and recently said, 'We're not in Judea and Samaria [occupied West Bank] in order to disappear one day. We're here for 50 years already, and we will be here for another 5,000 years. Our policy is clear: Settlement in the entire Land of Israel and normalization of life in Judea and Samaria [occupied West Bank]’.”

Ashrawi said that Israel is legalizing the expropriation of Palestinian land and its illegal settlement enterprise which are a war crime under the Rome Statute of the International Criminal Court and an egregious violation of international law and conventions, including United Nations Security Council resolution 2334.

“Since US President Donald Trump and his administration's recent unilateral moves to further victimize the Palestinian people with total disdain for international law and consensus, Israel has stepped up its illegal measures and cruel policies, primarily its land theft, settlement activities, home demolitions, and excessive use of violence. It is further encouraged by the international community's inaction and lack of intervention to curb Israeli violations,” she stated.

“The whole Israeli legal system is being distorted in the service of illegal settlements to become an instrument of the occupation as a whole,” Ashrawi stressed.

Tags: Israel West Bank PLO
Short Link rasanews.ir/201paP
Share
0
Please type in your comments in English.
The comments that contain insults or libel to individuals, ethnicities, or contradictions with the laws of the country and religious teachings will not be disclosed