Rasa - Jordan, Lebanon and Palestine have spoken out against Tel Aviv’s tax and land grab plans targeting churches in Jerusalem al-Quds, with Beirut and Amman describing the measures as a violation of international regulations. 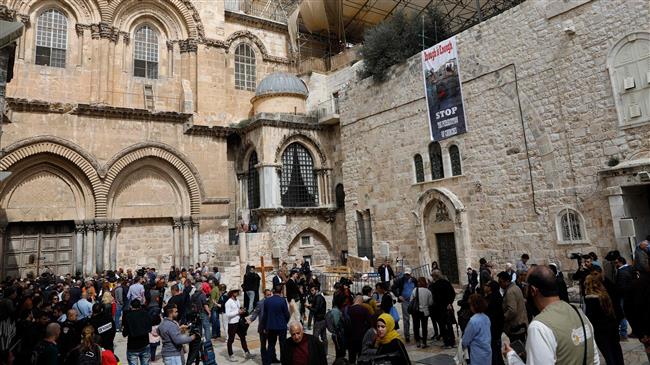 RNA - The Jerusalem al-Quds municipality recently canceled a tax exemption it had granted church-owned commercial properties in the Israeli-occupied city.

It also announced plans to start collecting 650 million shekels (over $186 million) in tax from 887 properties, which have no houses of prayer, and foreclosing the bank accounts of the Armenian, Catholic and Greek-Orthodox churches.

In another controversial development, Israeli cabinet ministers are studying a bill to expropriate land in Jerusalem al-Quds that churches sold to private real estate firms in recent years.

The new tax policy and the proposed land grab law led the heads of the Church of the Holy Sepulchre, considered one of the holiest sites in Christianity, to shutter its doors until further notice due to an Israeli “systematic and unprecedented attack against Christians.”

Reacting to Israel’s measures on Monday, Jordan, the custodian of Muslim and Christian holy sites in Jerusalem al-Quds, expressed “full solidarity” with the churches in the city.

“These systematic Israeli measures against churches in the holy lands and its daily assault on the sanctity of al-Aqsa Mosque pose a threat to the Christian and Islamic presence in al-Quds,” the ministry said in a statement.

“The Israeli attacks on the holy sites constitute a blatant violation of all international laws and conventions,” it added.

The ministry further described the closure of the Church of the Holy Sepulchre as a “a resounding shout to the international community and all international legal institutions about the need to put limits to Israel’s intransigence and its violation of the sanctity of Christian and Islamic sites in al-Quds.”

Lebanon’s President Michel Aoun also said the new tax policy of “the Israeli occupation authorities” is “in contravention of international laws and conventions.”

Aoun stressed that he considers the move “a deliberate targeting of the remaining Christian presence” in the occupied territories and violating “the ethnic and religious rights of all non-Jewish [people] in order to achieve all aspects of its racist project.”

According to Press TV, he also urged the international community to intervene to “stop Israeli practices.”

Israel lays claim to the whole Jerusalem al-Quds, but the international community views the ancient city’s eastern sector as occupied land and Palestinians consider it as the capital of their future state.

In December last year, US President Donald Trump sparked global uproar by announcing a dramatic shift in Washington’s policy on Jerusalem al-Quds. He declared that the US was recognizing Jerusalem al-Quds as the “capital” of Israel and planning to relocate the American embassy from Tel Aviv to the city.

Tags: Israel Palestine Jordan
Short Link rasanews.ir/201paH
Share
0
Please type in your comments in English.
The comments that contain insults or libel to individuals, ethnicities, or contradictions with the laws of the country and religious teachings will not be disclosed