Rasa - After two days of debate and haggle, the 15 members of the United Nations Security Council unanimously approved a resolution on a ceasefire in Eastern Ghouta in suburbs of the capital Damascus. 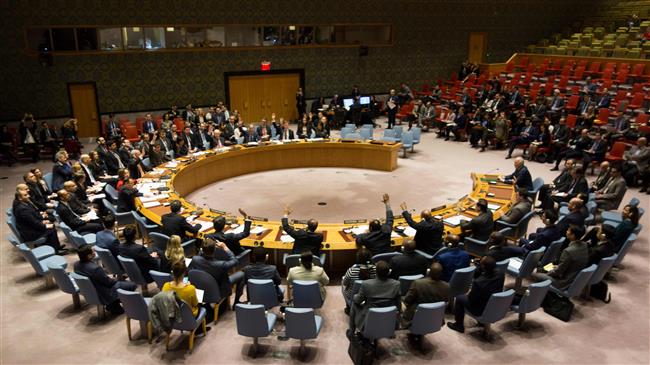 RNA - In effect after 72 of its approval and valid for 30 days, the resolution 2401 demanded the warring parties to cease the hostilities “immediately” to pave the way for safe and relentless delivery of the humanitarian aids and medical services as well as evacuation of the civilians from the conflict sites.

The UN’s International Organization for Migration suggests that some 350,000 civilians are currently living in Eastern Ghouta.

The resolution excludes from immunity granted by the truce to some armed groups fighting the Syrian government which were blacklisted as terrorist organizations, such as ISIS and al-Nusra Front, Syrian branch of Al-Qaeda. Earlier, al-Nusra merged with other Salafi groups and formed a larger organization dubbed Hayat Tahrir al-Sham.

Who is buying time?  Russia or the West?

The Western representatives at the session were apparently unhappy with the amendment introduced to the draft offered by Kuwait and Sweden, two non-permanent members of the UNSC, to gain Russia’s support. After the resolution was passed, the Western envoys unleashed a flood of blasts against Russia which pressed for some changes into the draft.

The US envoy to the UN Nikki Haley disparaged Moscow for what she called pressures to delay passing the resolution. Francois Delattre, France’s ambassador the UN, also commented on the resolution, saying that it came too late.

Despite the fact that the Western representatives argued that increase in number of the deaths and casualties was because of the two-day delay in passing the bill, many analysts assert that the Western anger was with Russia’s unwavering support for the Syrian government’s campaign to deal a blow to the terrorists who have been holding the suburbs of the capital and on a daily basis have been firing rockets and mortars into the capital. The terrorist groups over the past seven years of the Syrian conflict received unceasing backing from the West as well as their regional allies whose pro-terror moves blocked the way of any settlement to the devastating war.

A set of takfiri groups are holding Eastern Ghouta, with Hayat Tahrir al-Sham being among them. Russians’ intention behind pressures for changes in the text of the draft finally made it and the resolution excluded the terrorists from the deal. In response to the West’s anti-Moscow criticism, Vasily Nebenzya, the Russian ambassador to the UN, condemned the West for attacking Russia as an anti-terror actor, saying that the Westerners should focus on fighting the terrorism rather than adopting anti-Russian rhetoric. The representative of Syria at the UN Ibrahim al-Jaafari also had his words on the case: “We defend our sovereignty, and continue to combat terrorism everywhere on the Syrian soil”.

In the present conditions, the US-led West struggles to prop up the terrorist groups to perpetuate the ruinous conflict in Syria is highly observable. This plan is conspicuous in Washington’s actions and strategy in Syria whose government is currently having an upper hand as it keeps dealing blows to the foreign-backed terrorists. The US has a military presence in Syria’s north and built an alliance with the dominant Kurds there. There is evidence that Washington and the US-backed Syrian Defense Forces, a coalition of Kurdish militias with a limited number of Arab fighters, are cooperating with ISIS in southwestern Syria. Top White House officials Secretary of State Rex Tillerson and Secretary of Defense James Mattis, on the other side, maintained that the US will stay in Syria beyond ISIS obliteration. All these are signals that the US is for the war’s perpetuation which is only likely through constancy and the ongoing activity of the armed groups.

In January, Tillerson unveiled a set of ambitious goals that motivate the US to stay in Syria, including confronting the Iranian influence, pressing Assad to step down, and preparing the ground for the refugees to return home. Trump, however, few days later rejected that these objectives were on the US Syria agenda.

Over the past seven years of the war, whenever the terrorist groups and the US allies committed war crimes against the civilians, the West made no move at the international organizations to pass a resolution for the ceasefire, but has been keen to quickly move to put strains on Damascus through passing UN resolutions to save the terrorist groups under the ruse of rescuing the civilians whenever the Syrian army launched offensives against them.

Ceasefire may not hold

Analysts suggest that the UN-mandated truce will very likely not hold due to a lack of disorder in the ranks of the armed groups which reveal signs of irresponsibility. The failed humanitarian truces in the past bear witness to this prediction. The last comprehensive deal on cessation of hostilities to allow access to the civilians caught in the crossfire was reached in late 2016 in the eastern Aleppo.

On the other side, major militant groups in control at the Eastern Ghouta front such as Jaysh al-Islam, Faylaq al-Rahman, and Ahrar ash-Sham have not yet expressed their stances on the resolution. They broke a similar armistice which was reached during the January 26 peace negotiations in Vienna, Austria.

Syria’s official news agency SANA, reported that the Ghouta-based militant fighters fired dozens of rockets and mortars on various residential districts of Damascus on Saturday, echoing words of Syria’s al-Jaafari who had earlier warned that the terrorists will never respect the suspension of hostilities agreement despite the recommendations of their foreign patrons.

New gas attack was also reported in Eastern Ghouta on Sunday just hours after Russia warned that militants were planning a chemical attack there to pin it on the Syrian government.

Militant sources were quoted as saying that several people suffered symptoms consistent with exposure to chlorine gas in the al-Shayfouniya area on Sunday, and one child was killed.

The so-called Syrian Observatory for Human Rights, which is sympathetic to militants, said 14 civilians had suffered breathing difficulties after a Syrian warplane struck the village in the Eastern Ghouta region.

Hours before the gas attack the Russian Center for Reconciliation in Syria has warned that militants in Eastern Ghouta, suburbs of capital Damascus, are preparing to launch a chemical attack which they plan to blame on the Syrian government.

In addition to the terrorists, odds highly are that Turkey and the Kurds will not comply with the fire-holding accord. Despite the fact that the Turkish foreign ministry voiced support for the resolution, Ankara announced that beside pro-peace efforts Turkey will firmly act against the terrorist groups endangering the Syrian and regional unity. Last month Turkey launched an operation against the separatist Kurds in the Syrian enclave Afrin in the north. The Kurds, on the opposite side, said that they reserved the right to respond to any hostility against their positions, setting up a dim outlook for full implementation of the ceasefire.

Tags: Syria Russia
Short Link rasanews.ir/201paA
Share
0
Please type in your comments in English.
The comments that contain insults or libel to individuals, ethnicities, or contradictions with the laws of the country and religious teachings will not be disclosed