Rasa - Hundreds of persecuted Rohingya Muslims are still pouring over the Myanmar border into neighboring Bangladesh every week six months after a military crackdown sparked the massive refugee crisis. 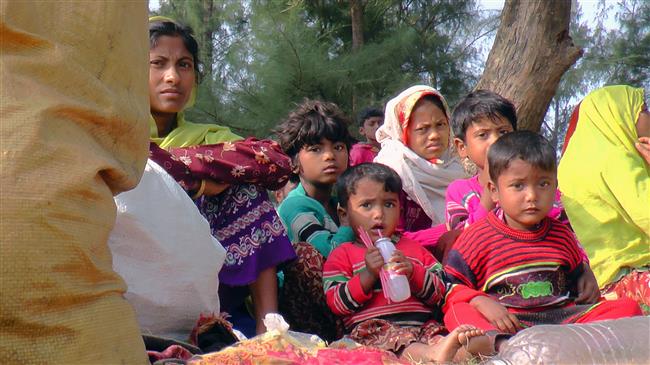 RNA - Latest figures show more than 2,500 have entered the overflowing refugee camps in Bangladesh so far in February.

Media reports said that the 200 Rohingya crossed the Naf river, which separates the two countries, into Bangladesh on Friday.

Human Rights Watch (HRW) recently said that another 55 villages have been razed since November.

Kate Nolan, coordinator for  the international medical charity Doctors Without Borders  (MSF) in Bangladesh said that new refugees have brought  harrowing accounts of torture and murder. "The new refugees say that they feel unsafe, threatened and harassed at home, in villages that are often abandoned."

Nur Mohammad, one of the recent arrivals, told media outlets that his village in Rakhine was surrounded by Buddhist vigilantes for days before they were allowed to leave. "The Moghs (Buddhists) torched our houses, kept us confined and starving."

Thirty-year-old Enayetullah Enayetullah accused Myanmar security forces of torching his shop, prompting him and his three brothers to flee their home in Mognapara village near the town of Buthidaung.

"Villages are razed to the ground. We walked for days through mountains to reach here." Enayetullah noted, adding,  "We stayed all these months hoping the situation will be fine. But in recent weeks, security forces have taken away our young men. If they abduct 10, only one returns."

According to refugees and monitoring groups, hundreds of Rohingya villages have been torched in the ongoing crackdown by military and Buddhist vigilantes over the past few months across Myanmar's Rakhine state.

Last week Dhaka sent a list of 8,000 names to Myanmar for verification.

The UN says anyone who goes back must be a volunteer, while Myanmar shows no sign of accepting the Rohingya as full citizens.

The repatriation was set to start last month, but was delayed by a lack of preparation, as well as protests staged by Rohingya refugees against the plan to send them back to Myanmar while conditions were not safe for their return.

"If they send us back, we'll be tortured or killed. We would rather be killed here in Bangladesh. Here, at least I'll get a Muslim burial," said Mohammad Elias, whose group has staged protests against repatriation in recent weeks.

Myanmar’s government troops have been committing killings, making arbitrary arrests, and carrying out arson attacks in Muslim villages in Rakhine state since late 2016.

The UN has described the 1.1-million-strong Muslim community as the most persecuted minority in the world.

Tags: Muslim Rohingya
Short Link rasanews.ir/201pZy
Share
0
Please type in your comments in English.
The comments that contain insults or libel to individuals, ethnicities, or contradictions with the laws of the country and religious teachings will not be disclosed