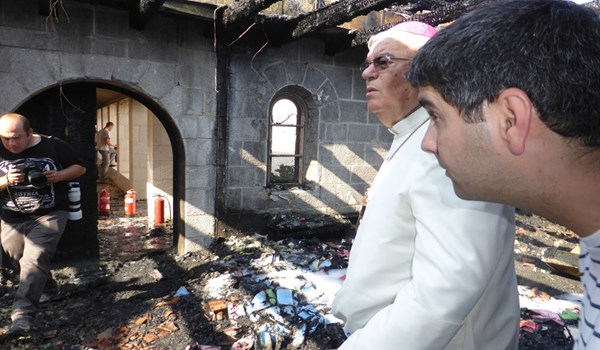 RNA - "This is a very egregious and dangerous violation of the status quo that has governed the status of Christian churches in Palestine for centuries, a press release issued by the PLO Department of Culture and Information said, WAFA reported.

These Churches have existed long before the state of Israel, and Palestinian Christians represent the oldest Christian tradition in the world with a centuries-long continuity in Palestine, the release stated.

The PLO official added that such forms of legislation deliberately target the Churches, their communities, assets, and property as a way of maintaining exclusivity and Jewish control, stressing that “This is part of the further escalation in Israel's policies to isolate Jerusalem and ethnically cleanse its Palestinian population from the city.”

Israel actually practices the exclusion and targeting of the "other" as literally inherent in the "Jewishness of the state, the release added.

"This is also a direct violation of the freedom of worship for all religions by a cruel and violent military occupation. Clearly, these dangerous developments are the outcome of Israel's official policies that blatantly discriminate against both Christian and Muslim Palestinians,” it said.

Jerusalem cannot and must not be subject to exclusive possession and greed, Ashrawi said, adding that “this exposes the false claims of Israel that it respects freedom of worship for all religions.”

“Since its occupation of the Palestinian West Bank and Gaza in 1967, Israel has systematically prevented Palestinian Christians and Muslims from reaching their holy sites of worship in Jerusalem and accessing basic services such as health and education in the occupied city,” it said.

Ashrawi noted that both US President Donald Trump and Vice President Mike Pence have directly contributed to such an assault on the heart of Christianity in the place where it was born.

“Their illegal recognition of Jerusalem as Israel's capital and moving the US Embassy to the occupied city have rendered them complicit in such an outrageous move,” she added.

We rely on the global community and people of conscience to hold Israel accountable for its belligerent occupation and for the grave injustices committed against the Palestinian people, she stressed.

“Such expressions of religious intolerance, bigotry and institutionalized discrimination must be brought to an end. Israeli impunity so far has provided Israel with a cover for its most extreme policies and measures on the ground. This is an escalation that must not go unchecked or unpunished," the release concluded.

The national reconciliation government also Sunday slammed Israel’s intentions to impose municipal taxes on churches as a new aggression against Jerusalem, and the Palestinian people and their holy sites.

Israeli authorities have recently imposed a property tax (Anona) upon churches, worth up to millions of shekels.

Regarding Israel’s proposed land appropriation law, the government warned of the serious consequences of such law, stressing that if passed, it would lead to the seizure of lands belonging to churches.

Government Spokesperson Yousef Al-Mahmoud called for a prompt international intervention to stop these Israeli measures, which he stressed, are a blatant attack on all agreements and international conventions and norms that guarantee the freedom of worship and respect the holiness of religious sites under all circumstances.

Jerusalem’s Christian leaders Sunday decided to close the Church of the Holy Sepulcher in the old City of Jerusalem in protest of Israel’s tax policy and a proposed land appropriation law.

In the meantime, the Supreme Presidential Committee for Church Affairs in Palestine confirmed its full support for the position of Patriarchs and heads of churches in Jerusalem to close the Church of the Holy Sepulcher in the old City of Jerusalem in protest of Israel’s tax policy and a proposed land appropriation law.

Tags: Church Israel
Short Link rasanews.ir/201pZp
Share
0
Please type in your comments in English.
The comments that contain insults or libel to individuals, ethnicities, or contradictions with the laws of the country and religious teachings will not be disclosed