Rasa - The secretary general of the Hezbollah resistance movement has warned the Lebanese nation against voting for pro-US candidates in the forthcoming parliamentary elections, saying such contenders will simply hand over the Arab country to Americans. 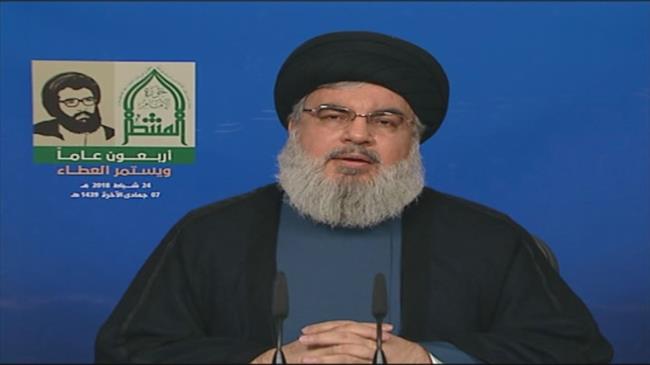 RNA - Addressing his supporters via a televised speech from the eastern Lebanese city of Baalbek on Saturday evening, Sayyed Hassan Nasrallah called upon people from all walks of life to participate in the elections, which are scheduled to be held on May 6.

“Voters should consider national interests when picking candidates and voting for them. People should approach the upcoming legislative polls from the perspective of fulfilling responsibilities towards the country,” he said.

Nasrallah further noted, “Voters should not make their decisions on the basis of candidates’ family connections, religious or party affiliations.”

The Hezbollah chief went on to say that the movement’s legislators represented the entire Lebanese nation, and not simply their political bloc.

Nasrallah added that Lebanese voters should not cast their ballots in favor of those who would hand over the country to the US, compromise over oil reserves with the Israeli regime, conspire against Hezbollah or destroy the country’s economy.

He said when voting in parliamentary elections, people should ask themselves what Hezbollah had offered to Lebanon and the nation, concerning the anti-Israel resistance front, stability and services.

“Your support for Hezbollah in the elections preserves the blood of martyrs who sacrificed their lives for the sake of the resistance movement," Nasrallah said.

Nasrallah also warned against the plots being hatched by Washington in the Middle East, describing the recent tour of the region by US Secretary of State Rex Tillerson in line with attempts to carry out such schemes.

Tags: Nasrallah Hezbollah
Short Link rasanews.ir/201pZa
Share
0
Please type in your comments in English.
The comments that contain insults or libel to individuals, ethnicities, or contradictions with the laws of the country and religious teachings will not be disclosed