Daesh stashed millions of dollars during reign of terror in region: Economist

Rasa - A report says Daesh rose to become the “richest terrorist group in history” by stashing millions of dollars across the region before losing its territorial rule in Iraq and Syria late last year. 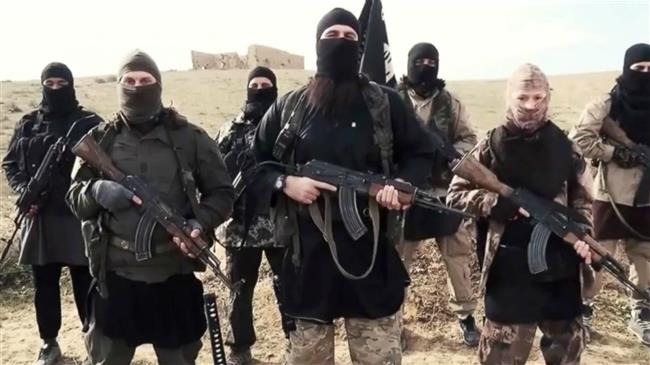 RNA - In a report on Thursday, the Economist news portal said that the terrorist group has invested in businesses in Iraq, bought gold in Turkey and continued to transfer money to its affiliates.

“You wouldn’t believe the amount of money that has gone out of IS’ [Daesh] territory,” the report quoted a former weapons-dealer involved in transferring the terrorists’ cash.

Daesh first emerged in Syria in 2014 and later expanded its campaign of terror to neighboring Iraq. The terrorist managed to seize large swathes of Syrian and Iraqi land in lightning advances.

It took three years for the Syrian and Iraqi national armies to fully liberate their land from the clutches of the world’s most notorious terror group.

The report said Daesh has built up fat reserves of cash as it gained ground in the two countries, where it declared a so-called “caliphate.”

Citing an unnamed Iraqi legislator, the report said Daesh smuggled $400 million out of Iraq and Syria during its retreat.

The terrorist group sold oil from the fields it captured, taxed and robbed the people it ruled and stole perhaps $500 million from Iraqi banks, making it the richest terrorist group in history, said the report.

It further said that the traditional tools used to starve terrorists of funds by blocking foreign donations were of little use.

“It became clear that the most important way to address IS financing was to deprive it of territory,” said an American counter-terrorism official.

The terrorists, who had anticipated their loss of land, mandated the use of their own currency in eastern Syria, an order it later extended to currency dealers and money-transfer shops, according to the report.

The Takfiri group has bankrolled hundreds of exchange houses in Iraq, said the report, adding that dozens of them even participated in the Iraqi central bank’s currency auctions in 2014 and 2015, enabling the group to convert Iraqi dinars into dollars.

Currency dealers in Turkish cities that border Syria said Daesh have been moving large sums of money out of the territories under its control since early last year.

According to Press TV, much of the cash has ended up in Turkey, where intelligence officials believe it is being stored by individuals for future operations, invested in gold and used to keep Daesh sleeper-cells active, the report said.

“You only need $500 a month to feed and house a cell of two or three people,” said Ahmet Yayla, the former head of counter-terrorism for the Turkish police.

The report said that Daesh has also been laundering its cash reserves by investing in legitimate businesses around the region.

The terror group, it said, has used middlemen, many of whom are tribal leaders or businessmen, to buy farms, car-dealerships, hotels and hospitals in Iraq.

The report said that the Takfiri group may use its businesses to siphon funds meant for reconstructing the region’s cities devastated during the Daesh reign of terror.

It added that extortion, smuggling and kidnapping would remain profitable, as the group shifts its focus from capturing territory to waging militancy.

Tags: DAESH Syria Iraq
Short Link rasanews.ir/201pZR
Share
0
Please type in your comments in English.
The comments that contain insults or libel to individuals, ethnicities, or contradictions with the laws of the country and religious teachings will not be disclosed