Rasa - Syria’s UN envoy has denounced the US and Europe for their silence on the carnage of civilians in Damascus by the terror groups operating in Eastern Ghouta, saying it is “unacceptable” to endanger the lives of eight million in the capital in order to protect a few thousand terrorists in its suburbs. 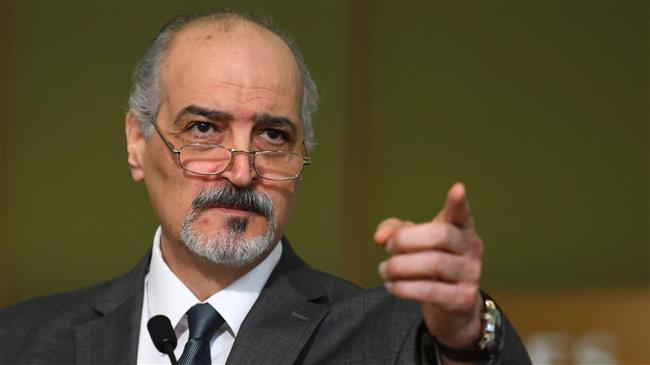 RNA - Bashar al-Ja’afari was speaking at a United Nations Security Council meeting on the situation in Syria on Thursday.

After losing most of the Syrian territories under their control, foreign-backed militant groups, including the notorious al-Nusra Front, are now largely concentrated in the Damascus suburb of Eastern Ghouta, an area they have been using to launch deadly mortar attacks on the capital.

Syrian government forces have been pounding terrorist positions in the area to liberate it and free a large number of civilians struggling there with malnutrition and lack of basic medical supplies.

The US and its allies accuse Syrian forces of killing civilians in its aerial campaign against militant positions in Eastern Ghouta, a claim sharply rejected by Damascus and Moscow, which backs the anti-terror operation with its air force.

Ja’afari further said the terrorist groups in Eastern Ghouta, which have been designated as terror organizations by the Security Council, have been targeting Damascus with hundreds of rocket and mortar shells on a daily basis, killing and injuring hundreds of its residents.

He expressed surprise that the US, along with its European and Persian Gulf allies, has remained silent about the deaths of civilians in the capital in the terror attacks from Eastern Ghouta.

The eight million citizens of Damascus, Ja’afari said, are under constant threat by a few thousand terrorists in Eastern Ghouta, and yet the Western countries are more concerned about the well being of those terrorists than that of the civilians in the capital.

He said the US-led coalition, purportedly fighting Daesh in Syria, has moved from the proxy war to direct aggression against Syria in order to achieve what the terrorists failed to achieve.

He complained that the UN has turned a blind eye to the coalition’s crimes, including its complete destruction of the northern city of Raqqah under the pretext of fighting Daesh.

Also, he said the world body is ignoring more than a month of Turkish aggression on the Afrin district in northern Syria as well as Israel’s repeated attacks on the Syrian territory.

Al-Ja’afari said the instances of the UN’s failure to call the aggressors to account “stress that this international organization suffers a professional and ethical crisis through adopting the stances of states which support terrorism in Syria and denying the right of the Syrian government to defend its citizens.”

According to Fars News Agancy, in remarks after the session, Syria’s ambassador said accusations by the United States, Britain and France — which he called the “three musketeers” — that the Syrian government was indiscriminately bombing civilians were completely false.

He accused them of ignoring rocket attacks by rebels in Eastern Ghouta that have killed scores in Damascus.

On Friday, at least two civilians were killed and over 30 others injured in renewed militant rocket attacks launched from Eastern Ghouta against residential areas in Damascus.

Tags: Damascus Syria
Short Link rasanews.ir/201pZQ
Share
0
Please type in your comments in English.
The comments that contain insults or libel to individuals, ethnicities, or contradictions with the laws of the country and religious teachings will not be disclosed