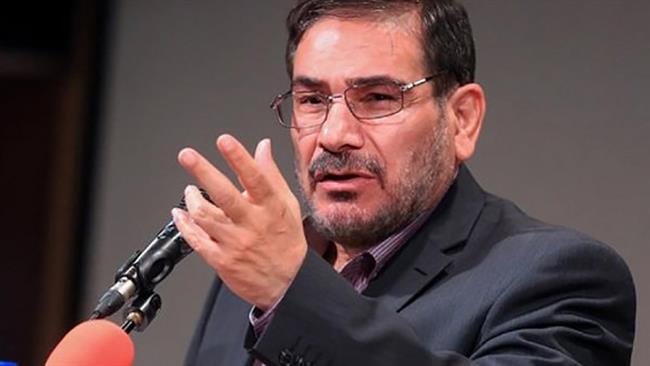 RNA - "The Joint Comprehensive Plan of Action (JCPOA) is an important test for Europe," Shamkhani said in a meeting with Spanish Foreign Minister Alfonso Dastis in Tehran on Wednesday.

He pointed to the US attempts to jeopardize the nuclear deal, and noted that failure of the JCPOA will discredit the international negotiations.

The official noted that the EU has not taken adequate measures to save the JCPOA.

Shamkhani said that Iran will withdraw from the JCPOA if it gets no benefit from the deal.

Elsewhere, Shamkhani lauded certain European countries' arm embargo against the UAE and Saudi Arabia for their crimes against the Yemeni people, and noted that warmongers cannot ignore the reality and evade their responsibility.

He also called for the EU pressure on the Zionist regime to stop escalation of tensions in the region by attacking Syria and Lebanon.

The official described terrorism as a common threat to the whole world, including Europe, and welcomed cooperation with Spain in fighting the sinister phenomenon.

In relevant remarks on Wednesday,  Iranian President Hassan Rouhani categorically rejected any possibility for renegotiating the 2015 nuclear deal between Tehran and the world powers, warning that his country's continued compliance depends on the other parties' commitment to the agreement.

"The agreement is the result of years of efforts and months of negotiations between Iran and Europe and all sides should be committed to their nuclear deal undertakings and act upon them," President Rouhani said in a meeting with Dastis in Tehran.

He underlined that there is no need for renegotiating the deal, and said, "The Islamic Republic of Iran will remain committed to the nuclear deal as long as the other side acts upon its undertakings."

Elsewhere, President Rouhani underscored the need for all countries to feel responsible for establishing long-term security in the region.

He also warned of the danger of arms race in the region, and said, "All countries should remain committed not to turn the region into a cache of ammunition."

Dastis, for his part, stressed the EU's full support for continued implementation of the nuclear deal, and said, "Spain and (other) EU member states attach importance to the expansion of ties with Iran and we can consolidate our relations through the survival of the nuclear deal."

Tags: Iran Ali Shamkhani
Short Link rasanews.ir/201pZD
Share
0
Please type in your comments in English.
The comments that contain insults or libel to individuals, ethnicities, or contradictions with the laws of the country and religious teachings will not be disclosed