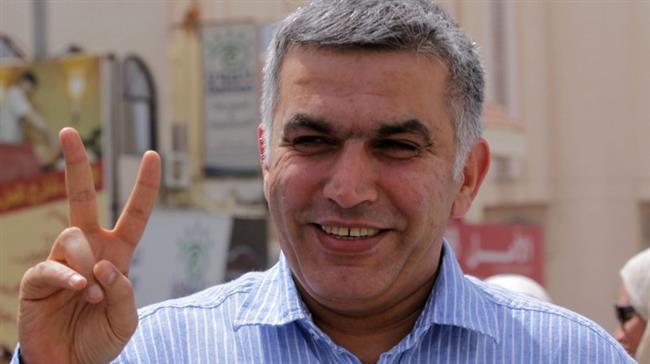 RNA - Rajab was already serving a two-year sentence over a January 2015 news interview in which he said that the Bahraini regime was torturing political prisoners.

The activist was on Wednesday sentenced to five more years behind bars over tweets critical of the Saudi-led war in Yemen, which has killed thousands of civilians, and the mistreatment of prisoners in a Bahraini jail.

“The new prison sentence for Nabeel Rajab is only the latest chapter in years of persecution and efforts to silence an activist solely for his efforts to sound the alarm on human rights abuses,” said Sarah Leah Whitson, Middle East director at Human Rights Watch (HRW) on Thursday.

“Rajab should never have faced such charges or spent one day in prison for them,” she said.

Amnesty International also slammed the ruling as a “shameful attack on freedom of expression.”

Amnesty’s regional director for the Middle East and North Africa Heba Morayef called the verdict as “a slap in the face to justice.”

“This sentence demonstrates the authorities’ ruthless determination to crush all forms of dissent and leaves no room for doubt about the extreme lengths to which they are willing to go to in order to silence peaceful critics,” she said on Wednesday.“This shameful verdict must be quashed and the authorities must drop all pending charges and immediately release Nabeel Rajab. It is absolutely outrageous that he be forced to spend a further five years in jail simply for daring to voice his opinions online,” she adde.

The International Federation for Human Rights (FIDH) also condemned the verdict as “outrageous sentence [that] contributes to further shut down space for civil society in the country.”

“We are appalled by the way the Bahraini authorities are persecuting a man whose only crime has been to use his right to free speech to draw attention to human rights violations,” RSF said.

On Wednesday night, Bahrainis took to the streets in several areas of the Persian Gulf kingdom to vent their anger at the ruling handed down to the rights activist.

Demonstrators staged rallies in several villages in the suburbs of the capital Manama, shouting anti-regime slogans and denouncing the recent ruling.

In some areas police clashed with protesters and used tear gas to disperse them.

Tags: Manama Saudi bahrain
Short Link rasanews.ir/201pZ8
Share
0
Please type in your comments in English.
The comments that contain insults or libel to individuals, ethnicities, or contradictions with the laws of the country and religious teachings will not be disclosed